Rosenstein: If There is Wrongdoing at the FBI, We Will Make It Right 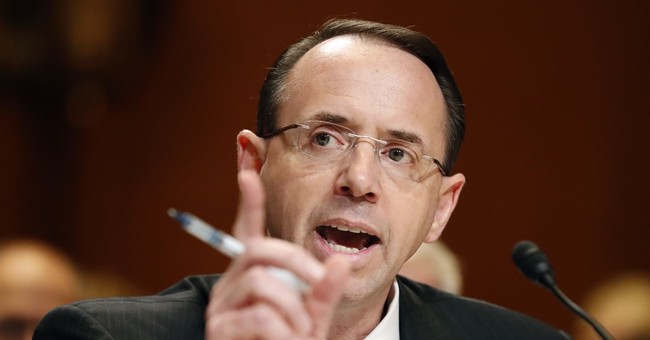 "America’s federal, state, and local law enforcement agencies are more professional today than ever. Rigorous scrutiny by internal affairs offices and external oversight agencies has resulted in increased accountability and higher standards," Rosenstein said during his opening remarks. "When wrongdoing occurs, we are more likely to discover it, and we remedy it. That is critical to building and maintaining public confidence."

"Over the past eight months, I have spoken with thousands of Department employees across the country. I remind them that Justice is not only our name, it is our mission," he continued. "Justice requires a fair and impartial process. That is why we have a special responsibility to follow ethical and professional standards."

Rosenstein's testimony came just hours after the Department of Justice gave thousands of text messages to journalists. The messages were sent between former FBI counterintelligence agent Peter Strzok and FBI attorney Lisa Page in 2016 and a significant number of them are centered on opposing then presidential candidate Donald Trump.

Strzok worked on the Special Counsel under Robert Mueller for a little more than a month before being reassigned to the human resources department at the Bureau for the content of the text messages. Strzok led the FBI investigation into Hillary Clinton's mishandling of top secret, classified information on her private email server. She was cleared in July 2016 and was not referred to DOJ for prosecution.

When asked about whether Rosenstein was concerned about political bias impacting the way FBI agents operate, he said while he does believe investigators can hold a political opinion and properly execute their duties, a review is underway by the inspector general to assure any wrongdoing is exposed.