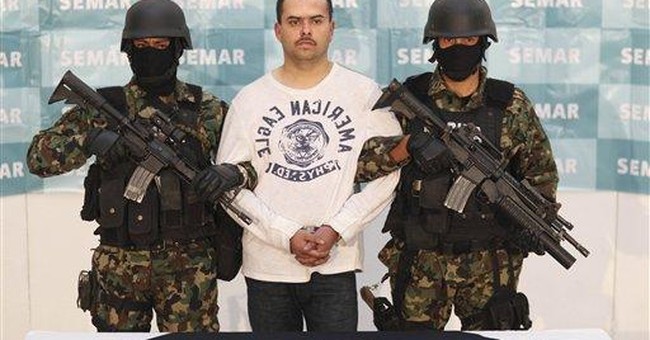 “HSI Special Agents Jaime Zapata and Victor Avila were in Mexico to protect and serve our country when they were ambushed by these ruthless criminals, who will now spend the rest of their lives in a prison cell,” Acting Assistant Attorney General Kenneth Blanco said in a statement.  “This case serves as a reminder, that if you harm a U.S. agent, the U.S. government will pursue you to the ends of the earth to ensure that you are brought to justice.”

In 2011 Zapata and Avila were on official assignment in Mexico when they were ambushed by members of the Zetas while driving on a highway driving back to the United States. The members sent a barrage of bullets into the ICE vehicle, killing Zapata and severely wounding Avila.

“Special Agents Zapata and Avila dedicated themselves to federal law enforcement,” U.S. Attorney Jessie Liu said.  “While working on behalf of our country, they were ruthlessly gunned down in a carjacking attempt by members of hit squads for the Los Zetas drug cartel.  We have never forgotten what happened to these two American heroes in that ambush on a Mexican highway more than six years ago.  The sentencings this week reflect our determination to protect U.S. officials abroad and bring to justice those who do them harm.”

Seven Mexican nationals were charged in connection to the Zapata/Avila case. The rest of them will be sentenced on Tuesday.

“The sentences handed down today should serve as a powerful message to drug cartels and other transnational criminal organizations that there is no escape from justice, and that we will not rest until they have been held accountable for their crimes to the fullest extent of the law,” ICE Acting Director Thomas Homan said.  “We remain grateful to the government of Mexico, the Department of Justice, and all our partners involved in sending these murderers to prison.  The men and women of ICE will not forget the example of bravery and sacrifice set by Special Agent Zapata as we work to eradicate these criminal networks across the globe.”

An inspectors general report published in March showed the Zeta cartels who killed Zapata were armed by the Obama administration after ATF failed to arrest known straw purchasers working to traffic guns from Texas to cartels in Mexico.

“I began asking questions about the shady operations of the ATF and its gunwalking operations more than six years ago.  Congress is still in litigation regarding Fast and Furious to understand the full extent of what happened and how the Obama administration attempted to avoid congressional oversight, and now four and a half years after my request for an IG investigation we’re finally learning more from the Inspector General about another botched operation," Senate Judiciary Chairman Chuck Grassley said about the report.

"Sadly, the information provided by whistleblowers appears to be proven true once again.  ATF did indeed fail to seize illegal firearms that later turned up at a crime scene in Mexico, trafficked by the same suspects who had previously sold two firearms used in the February 15, 2011, attack on U.S. Immigration and Customs Enforcement in Mexico," he continued. "The circumstances look all too familiar and seem to be part of a pattern of recklessness that failed to recognize the consequences of allowing firearms to get in the hands of the cartels."