No Remorse: NYC ISIS Terrorist Brags About Running People Over 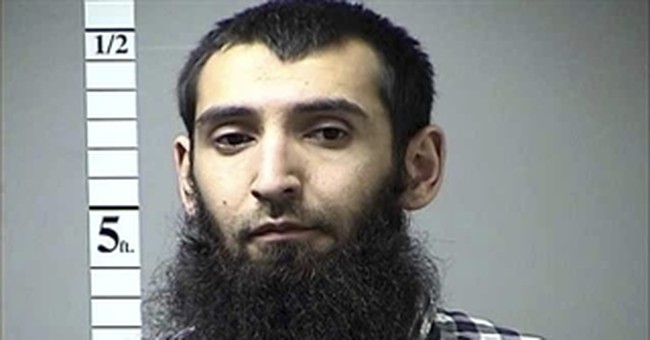 After running over dozens of people killing eight yesterday in New York City, Islamic terrorist Sayfullo Habibullaevic Saipov is reportedly boasting about the attack after treatment at a local hospital. He was shot in the buttocks by a New York City police officer after barrelling through a bike lane with a rented truck. He left a note declaring allegience to ISIS.

A source tells CBS News the suspect in NYC terror attack is pleased with the attack and is unapologetic https://t.co/8TZMhsNFhp pic.twitter.com/jToxdPvueh

Latest from @cbsnews: NYC attacker bragging about attack in hospital; pleased with his "success," says crashing into school bus an accident--meant to run over more people. Knives recovered from vehicle along w/ 10-15 pieces of paper where he wrote that ISIS will live forever.

A source tells CBS News the suspect in NYC terror attack is pleased with the attack and is unapologetic https://t.co/8TZMhsNFhp pic.twitter.com/jToxdPvueh

Saipov is from Uzbekistan and entered the country in 2010 through the State Department's Diversity Visa Program.

The DV program makes up to 50,000 immigrant visas available annually, "drawn from random selection among all entries to individuals who are from countries with low rates of immigration" to the U.S., according to the U.S. Citizen and Immigration Services website. Applicants must prove they have a clean criminal record, have a high school diploma or its equivalent, or have at least two years of work experience within the past five years in order to qualify.

The program originated as part of a bill introduced in 1990 by Sen. Chuck Schumer, D-N.Y., then a member of the House. Schumer’s measure to make a set number of visas available to “diversity immigrants” from certain countries was absorbed into a larger House immigration bill, which was sponsored by Schumer and 31 others, including several Republicans.

The Gang of 8 immigration overhaul, which failed, included a provision to end the program.