Trump Praises First Responders in Vegas: A Grateful Nation Thanks You 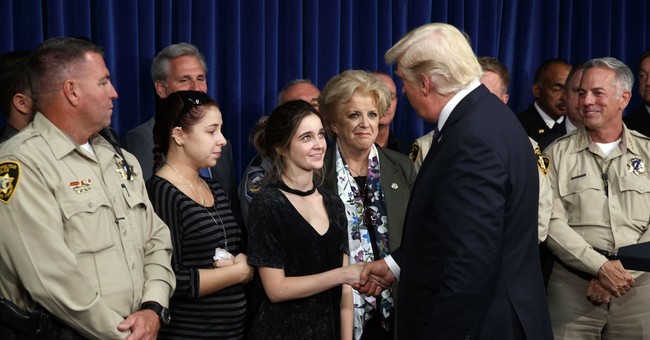 President Trump visited Las Vegas on Thursday and made a stop at the Las Vegas Police Department command center to pay his respects to victims of Sunday night's attack and to thank first responders who stopped the bloodshed.

"Every hero saved so many lives and believe me, a grateful nation thanks you," Trump said. "Words cannot describe the bravery that the whole world witnessed on Sunday night."

"We cannot be defined by the evil that threatens us or the violence that incites such terror. We're defined by our love and caring," he continued. "We know that your sorrow feels endless. We stand together to help you carry your pain."

The President was accompanied by First Lady Melania Trump throughout the day and also visited wounded victims in a local hospital.

"We met patients that were absolutely terribly wounded.  And the doctors, the nurses, all of the people at the hospital have done a job that's indescribable.  And they were full the night that it happened, before it happened, and they found room for many people," Trump said about his hospital visit. "What I saw today is just an incredible tribute to professionalism, and what they have done is incredible.  And you never want to see it again, that I can tell you.  And the patients, the bravery -- some were very, very badly wounded, and they were badly wounded because they refused to leave.  They wanted to help others because they saw people going down all over. And it's an incredible thing to see.  There's tremendous bravery.  The police department, incredible.  The people themselves, incredible.  People leaving ambulances to have somebody else go because they thought they were hurt even more so."

The President is now on his way back to Washington D.C.