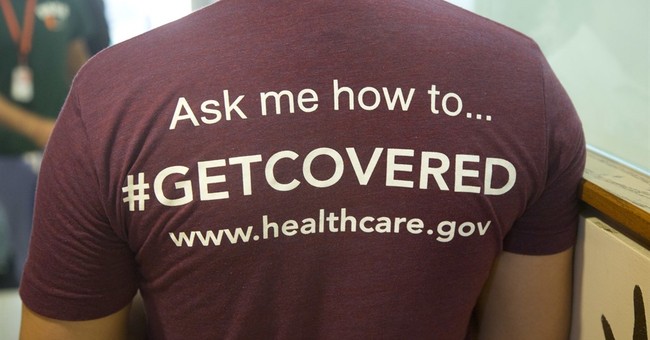 When Obamacare was sold on a pile of lies back in 2010, President Obama promised the American people his signature piece of legislation would lead to more health insurance coverage, not less. He also promised those currently covered by health insurance plans would be able to keep them and their doctors.

Now as the Senate gets down to the wire on an Obamacare repeal and replacement bill, new data from Gallup shows an additional two million people have been pushed out of the insured market this year alone.

The number of U.S. adults without health insurance has grown by some 2 million this year, according to a major new survey that finds recent coverage gains beginning to erode.

The new numbers highlight what's at stake as Congress returns to an unresolved debate over Republican proposals to roll back much of former President Barack Obama's health care law.

The Gallup-Sharecare Well-Being Index, published Monday, found that the uninsured rate among U.S. adults was 11.7 percent in the second three months of this year, compared with a record low of 10.9 percent at the end of last year. Though small, the change was statistically significant, survey analysts noted.

Peering at this year, Gallup-Sharecare found an erosion of progress, with the number of uninsured edging up again. It estimated nearly 2 million dropped out of coverage.

That may be a reflection of rising premiums and dwindling choices in the insurance markets created under Obama.

A new healthcare bill is expected to be introduced in the Senate this week. The previous version passed by the House was met with opposition from conservatives and moderate Republicans in the Senate. Majority Leader Mitch McConnell can afford to lose only two Republican votes in order to get the legislation to President Trump's desk for a signature. There are just 15 working days left before the August recess.

Earlier today, President Trump urged lawmakers to get the job of repeal and replace done before leaving town.

I cannot imagine that Congress would dare to leave Washington without a beautiful new HealthCare bill fully approved and ready to go!

Share this on Facebook
Tweet
Here is Biden’s Schedule for the Weekend
Katie Pavlich
The Goalposts Keep Moving: CDC Director Says the Definition of Fully Vaccinated May Change
Leah Barkoukis
Biden State Department Admits: We're in Touch with Hundreds of US Citizens Stranded in Afghanistan
Guy Benson
South Carolina General Electric Employees Stage Walkout Over Vaccine Mandate
Spencer Brown
This Is Who Dr. Fauci Blames for the Rise in Deaths Among Adults in the UK