In Calls For Crackdown, Hillary Clinton is Lying About Gun Industry Immunity Again 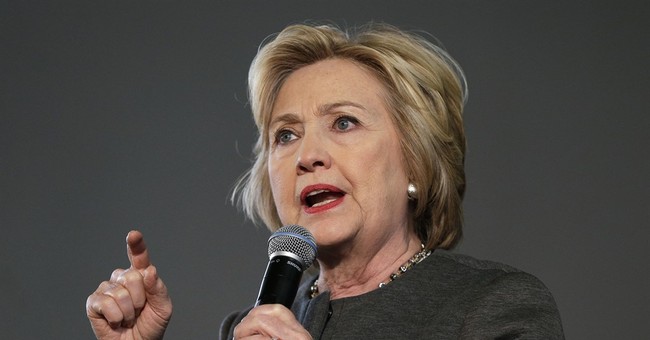 There's only one issue on which Democrat frontrunner Hilary Clinton can get to the left of her rival Bernie Sanders: gun control. She also has to lie about the gun industry, specifically manufacturers, in order to state her position.

On the campaign trail Clinton keeps recycling bogus claims the gun industry has immunity from lawsuits not afforded to other industries. She made this claim last fall, made the claim again this week during an interview with CNN and made the claim during a townhall style campaign event in New York, where she demanded more gun control.

In a Tuesday town hall in Brooklyn, Clinton took some shots at Sanders, particularly on his plan to provide free college tuition and his vote in 2005 to provide legal immunity for gun manufacturers. The Clinton campaign is betting that Sanders is especially vulnerable on the gun issue in New York, which tightened its laws in response to the 2012 Sandy Hook Elementary School shooting in Newtown, Conn.

As I've written before, this is a smear campaign being run by the left and being promoted nationally by Clinton through media outlets who fail to challenge her. Gun manufacturers and companies are responsible for bad products. They are not responsible for bad people who use their products improperly.

The so-called immunity and “whole protection” Clinton and her anti-gun supporters are referring to is the Protection of Lawful Commerce in Arms Act, which was passed by a bipartisan Congress and signed into law by then-President George W. Bush in 2005. In fact, Democratic presidential candidate Bernie Sanders voted for it — not because the senator is from Vermont but because it was the logical, fair thing to do. Due to political pressure grounded in hysteria rather than based in fact, Sanders has changed his position and now says he would vote against the legislation.

There are seven purposes outlined for the act, but the first purpose is the most applicable to the claims of Clinton and her allies, which is to “prohibit causes of action against manufacturers, distributors, dealers, and importers of firearms or ammunition products, and their trade associations, for the harm solely caused by the criminal or unlawful misuse of firearm products or ammunition products by others when the product functioned as designed and intended.”

“To prohibit civil liability actions from being brought or continued against manufacturers, distributors, dealers, or importers of firearms or ammunition for damages, injunctive or other relief resulting from the misuse of their products by others,” the legislation states.

To put it simply, this legislation means the gun industry is not liable for the actions of bad people who use their products to do harm. The legislation does not strip liability for bad products, nor does it protect companies from knowingly selling firearms to people they know will use them to carry out a crime.

To prove immunity and whole protection for the gun industry simply doesn’t exist, we can look at a number of liability lawsuits filed and settled after the 2005 Lawful Commerce Act was passed. Gun companies Remington, Taurus and Century Arms have all been under fire in recent years for selling allegedly defective products.


Be sure to check out Bearing Arms for more on this issue.