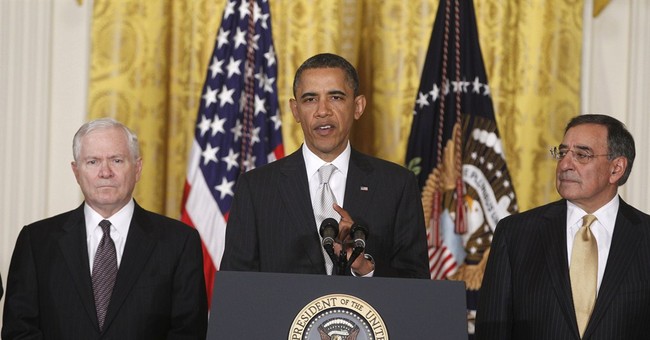 For years the Obama administration has been accused of micromanaging the wars in Iraq and Afghanistan from inside the White House. Now in an astonishing report from Fox News anchor Bret Baier, three former Obama Defense Secretaries are openly slamming him for his distrust of the military, his failure to lead and they're exposing his inexperienced and closest advisors for second guessing senior field commanders with phone calls to the battlefield.

"President Obama, he's one of the youngest presidents we've ever had. One of the most inexperienced presidents we've ever had. He has a staff around him that is very inexperienced. I don't think there's one veteran on his senior staff at the White House. I don't believe there's one business person. I don't believe there is one person who's ever run anything. Other than Vice President Biden, none of them have ever been elected to anything. You must levin the loaf, levin your advisors where you get a lot of experience at difference things where he, the President himself, is so inexperienced," Former Defense Secretary Chuck Hagel said. "I think he's got to fundamentally understand and I'm not sure he ever did nor people around him, the tremendous responsibility the United States has. Not to be the world's policemen, but to lead and we're the only ones who can. The world becomes more dangerous, not less dangerous, when America gets less involved in the world. I don't mean invading and occupying and imposing, but leading."

"It was the operational micromanagement that drove me nuts of White House and NSC (National Security Council) staffers calling senior commanders out in the field and asking them questions, second guessing commanders," Former Defense Secretary Robert Gates, who also served under President Bush, said. "When I I was Deputy National Security Advisor, if I would have tried to, even as deputy, if I had tried to call a field commander, going around Dick Cheney who was Secretary of Defense or Colin Powell who was Chairman of the Joint Chiefs, I'd have had my head handed to me, probably personally by the President."

"I told the combatant commanders and the field commanders, 'If you get calls from the White House staff, if you get a call from the President that's one thing, that's totally okay, that's the chain of command, but you get a call from some White House or National Security Council staffer, you tell them to call me instead and then tell them, oh by the way, go to hell and that's directly from the Secretary of Defense," Gates continued.

"I think what I've seen in these last four years is almost this cautiousness and over correction which makes it appear that the United States is hesitant to take action and that sends, I think, a message of weakness," Former Defense Secretary Leon Panetta said.

As if inexperienced White House advisors micromanaging the battlefield wasn't bad enough, late last year we learned from an exclusive in the Daily Beast intelligence reports were being scrubbed to fit the political narrative that terrorism around the world, including ISIS, was shrinking.

More than 50 intelligence analysts working out of the U.S. military’s Central Command have formally complained that their reports on ISIS and al Qaeda’s branch in Syria were being inappropriately altered by senior officials, The Daily Beast has learned.

The complaints spurred the Pentagon’s inspector general to open an investigation into the alleged manipulation of intelligence. The fact that so many people complained suggests there are deep-rooted, systemic problems in how the U.S. military command charged with the war against the self-proclaimed Islamic State assesses intelligence.

“The cancer was within the senior level of the intelligence command,” one defense official said.

Two senior analysts at CENTCOM signed a written complaint sent to the Defense Department inspector general in July alleging that the reports, some of which were briefed to President Obama, portrayed the terror groups as weaker than the analysts believe they are. The reports were changed by CENTCOM higher-ups to adhere to the administration’s public line that the U.S. is winning the battle against ISIS and al Nusra, al Qaeda’s branch in Syria, the analysts claim.

It should be noted that second guessing field commanders had severe and serious consequences in Afghanistan with 70 percent of U.S. troop casualties there occurring during President Obama's time in the White House.