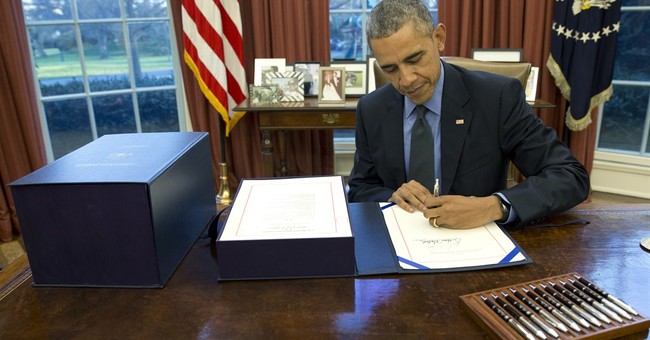 President Obama will meet with Attorney General Loretta Lynch today to discuss his options surrounding the implementation of new gun control measures through executive action. Because Obama is choosing to go around Congress on the issue, Republicans are vowing to immediately reverse whatever action he takes should they win back the White House in November.

"All these executive orders he's gonna come out with tomorrow that are going to undermine our Second Amendment rights -- on my first day in office, they're gone," Florida Sen. Marco Rubio said at a campaign stop in New Hampshire on Sunday morning.

"Fact is, if he wants to make changes to these laws, go to Congress and convince the Congress that they're necessary. But this is going to be another illegal executive action, which I'm sure will be rejected by the courts and when I become President will be stricken from executive action by executive action I'll take."

"There's an assault on the Second Amendment. You know Obama's going to do an executive order and really knock the hell out of it," Trump said.

"His first impulse always is to take rights away from law-abiding citizens, and it's wrong. And to use executive powers he doesn't have is a pattern that is quite dangerous," Bush said.

The NRA is also vowing to fight Obama's move.

Keep in mind that is was Democrats, not Republicans, who killed President Obama's gun control measures back in 2013.

Obama will sit down for a town hall style discussion about his gun grab with CNN's Anderson Cooper Thursday from George Mason University.