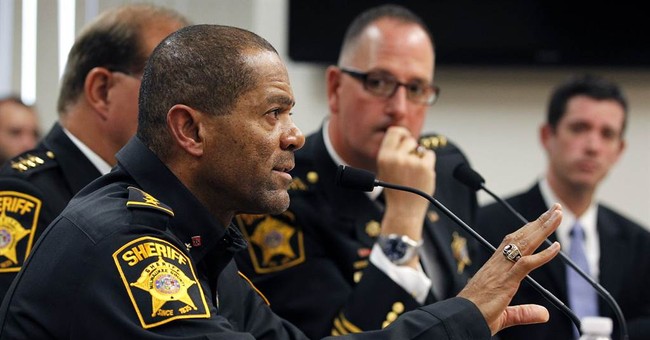 Milwaukee Sheriff David Clarke gained notoriety last year after releasing a series of radio advertisements encouraging people to arm themselves for self defense purposes. He just won a tough re-election battle in Wisconsin.

Now, Clarke is calling out Attorney General Eric Holder in a big way for his meddling in Ferguson in the case of Officer Darren Wilson and Michael Brown.

During a recent event at the National Press Club in Washington D.C. and before the grand jury made its decision not to indict Officer Wilson, Clarke accused Holder of exploiting a racial fire and compared Al Sharpton to a vulture feeding on a roadside carcass.

"I'm not one known to sugar coat things. This pissed me off. I sat up and watched as events unfolded in Ferguson, Missouri. [It's a] unfortunate situation obviously. Anytime a law enforcement officer uses force that takes a life, it deserves a thorough, transparent vetting, investigation, we all agree with that. But then some groups began to converge on the small town of Ferguson, Missouri, like vultures on a roadside carcass. Groups like the New Black Panther Party. People like Al Sharpton. To come and exploit that situation and instead of coming into help and restore calm, poured gas on that fire with some of their inflammatory and irresponsible rhetoric," Clark said. "I sat up there and listened to Governor Nixon and I sat up there and listened to Claire McCaskell the senator and then I sat up there and listened to Eric Holder throw law enforcement officers under the bus for political expediency. These are the same individuals at election time who come around wanting support from law enforcement organizations...I expected that from Governor Nixon. I expected that from Claire McCaskell. Those are nothing but two-bit politicians, they do that sort of thing, that's what politicians do you know that…but I did not expect that from Eric Holder, who calls himself a law enforcement officer."

Last week Clarke made an appearance with Fox News' Neil Cavuto and had some strong words for President Obama, who has been engaged in Ferguson since earlier this year.