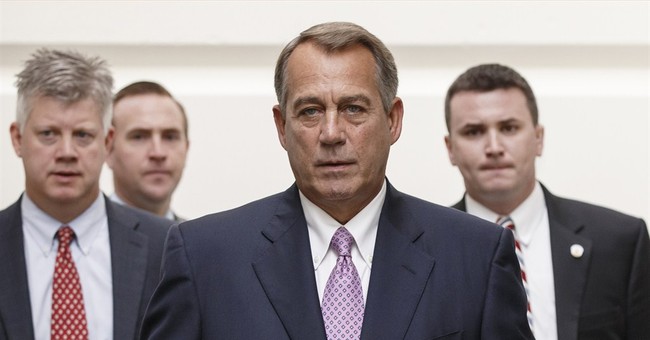 Yesterday during remarks to reporters, President Obama said no party has a monopoly on good ideas and demanded the House of Representatives reopen the government. He also reiterated his stance that he will not negotiate over the budget or the debt ceiling and told Congress to "do its job" to fund the government.

But the fact is, the House of Representatives has already passed more than a dozen pieces of legislation funding the government. Here is a list courtesy of Speaker John Boehner's office:

Continuing resolution (H.J. Res. 59): keeps the government running at current spending levels; ensures there’s no special treatment for Congress under the president’s health care law; and delays ObamaCare’s individual mandate, providing all Americans with the same relief the president has given big businesses. (Passed in the House 228-201)

Continuing resolution (H. Res. 368): insists on plan to fund the government running at current spending levels; ensure there’s no special treatment for Congress under the president’s health care law; delays ObamaCare’s individual mandate, providing all Americans with the same relief the president has given big businesses; and requests a formal House-Senate conference to resolve differences. (Passed in the House 228-199)

Provide Local Funding for the District of Columbia Act (H.J. Res. 71): allows our nation’s capital to continue operating using its own funding. (Passed in the House by voice vote).

Open Our Nation's Parks and Museums Act (H.J. Res. 70): opens all of our national parks and museums, including the WWII Memorial in Washington, DC that was initially closed to veterans by the administration. (Passed in the House 252-173)

Research for Lifesaving Cures Act (H.J. Res. 73): provides funding for the National Institute of Health, which is responsible for lifesaving medical innovations and cancer research. Click here to see Senate Majority Leader Harry Reid's (D-NV) comments about this effort. (Passed in the House 254-171)

Honoring Our Promise to America’s Veterans Act (H.J. Res. 72): provides immediate funding for critical veterans benefits and services, including disability claims, education and training, and more. (Passed in the House 259-157)

Nutrition Assistance for Low-Income Women and Children Act (H.J. Res. 75): provides immediate funding for the Special Supplemental Nutrition Program for Women, Infants, and Children, which “serves nearly 9 million mothers and young children,” and provides “vital nutrition that poor families might otherwise be unable to afford.” (Passed in the House 244-164)

Food and Drug Safety Act (H.J.Res. 77): provides immediate funding for the Food and Drug Administration. (Passed in the House 235-162)

Deficit Reduction and Economic Growth Working Group Act (H.R. 3273): creates a bipartisan, bicameral working group charged with beginning negotiations, resolving the differences between the House and Senate, and helping re-open the government and address our debt. (Passed in the House 224-197)

Federal Worker Pay Fairness Act (H.J. Res. 89): ensures that federal employees who are still on the job during Democrats' shutdown are paid on time. (Passed in the House 420-0)

The only piece of legislation the Senate took up and that Obama signed is the Pay Our Military Act, everything else has been rejected.