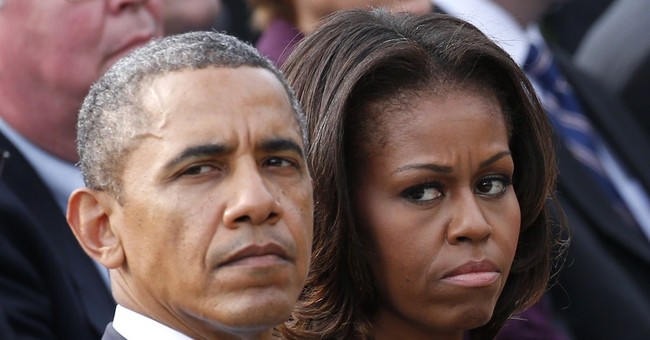 Speaking at a memorial service held over the weekend in honor of Navy Yard shooting victims and their families, President Obama didn't miss another chance for a good crisis to go to waste:

As President, I have now grieved with five American communities ripped apart by mass violence. Fort Hood. Tucson. Aurora. Sandy Hook. And now, the Washington Navy Yard. And these mass shootings occur against a backdrop of daily tragedies, as an epidemic of gun violence tears apart communities across America -- from the streets of Chicago to neighborhoods not far from here.
...
And yet, here in the United States, after the round-of-clock coverage on cable news, after the heartbreaking interviews with families, after all the speeches and all the punditry and all the commentary, nothing happens. Alongside the anguish of these American families, alongside the accumulated outrage so many of us feel, sometimes I fear there’s a creeping resignation that these tragedies are just somehow the way it is, that this is somehow the new normal.

No other advanced nation endures this kind of violence -- none. Here in America, the murder rate is three times what it is in other developed nations. The murder rate with guns is ten times what it is in other developed nations. And there is nothing inevitable about it. It comes about because of decisions we make or fail to make. And it falls upon us to make it different.
...
But we Americans are not an inherently more violent people than folks in other countries. We're not inherently more prone to mental health problems. The main difference that sets our nation apart, what makes us so susceptible to so many mass shootings, is that we don’t do enough -- we don’t take the basic, common-sense actions to keep guns out of the hands of criminals and dangerous people. What's different in America is it's easy to get your hands on gun -- and a lot of us know this. But the politics are difficult, as we saw again this spring. And that’s sometimes where the resignation comes from -- the sense that our politics are frozen and that nothing will change.

By now, though, it should be clear that the change we need will not come from Washington, even when tragedy strikes Washington. Change will come the only way it ever has come, and that’s from the American people. So the question now is not whether, as Americans, we care in moments of tragedy. Clearly, we care. Our hearts are broken -- again. And we care so deeply about these families. But the question is, do we care enough?

Got that? If you don't support new "common sense" gun control measures, you just don't care about preventing mass shootings. And with all due respect, mass shootings are not the new normal and are not on the rise as President Obama would like the country to believe. Violence in the streets of Chicago between rival gangs is normal. Mass shootings, are not.

Let's refresh what happened last week: Mad man Aaron Alexis, who was hearing aliens talk to him, purchased a shotgun legally at a Virginia gun store after passing two background checks. He carved cryptic sayings into the shotgun like "better off this way," and "my elf gun." He then illegally took that gun into Washington D.C., illegally brought it into the Navy Yard and committed mass murder. When it comes to more gun control, I'm not exactly sure what Obama is trying to get out here. Is he implying we should institute more restrictions on basic shotguns?

So what's next? Although Obama said in his remarks Sunday that changes in gun control will come from Americans, not Washington, White House Press Secretary Jay Carney announced last week Obama is getting ready to take even more executive actions on the issue.