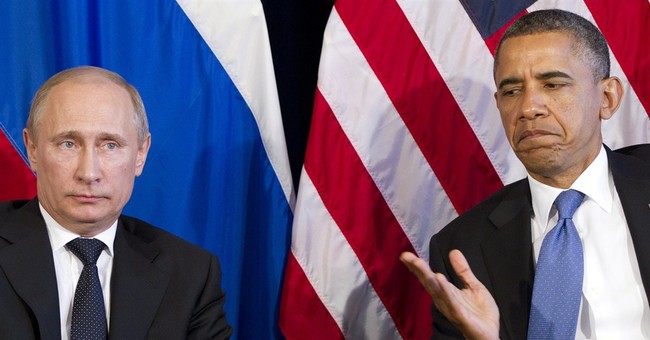 President Obama is headed to Russia for the G20 Summit and Russian President Vladimir Putin is already getting ahead of the game by calling Obama's plan on Syria "ridiculous."

The Russian president, who Obama recently needled for acting like a “bored” schoolboy during their last one-on-one meeting, also argued that an attack without the authorization of the U.N. Security Council — authorization of which he has thwarted at every turn — would amount to a violation of international law and could be seen as nothing more than “an act of aggression” on the part of the United States.

“In our view, it seems completely ridiculous that the regular armed forces, who are actually on the attack and in some places have the so-called rebels surrounded and are finishing them off, that in these conditions” would use prohibited chemical weapons, Putin told the Associated Press, “understanding quite well that this could be a reason for sanctions on them, including the use of force. It’s just ridiculous. It does not fit into any logic.”


Putin is also calling Secretary of State John Kerry a liar for denying al Qaeda has a large role in rebel forces.

"They lie beautifully, of course. I saw debates in Congress. A congressman asks Mr Kerry: 'Is al Qaeda there?' He says: 'No, I am telling you responsibly that it is not'," Putin said at a meeting of his human rights council in the Kremlin.

"Al Qaeda units are the main military echelon, and they know this," he said, referring to the United States. "It was unpleasant and surprising for me - we talk to them, we proceed from the assumption that they are decent people. But he is lying and knows he is lying. It's sad."


Meanwhile, the UN is warning Obama against a strike without approval because it would be "illegal" by international standards, something the President used to actually care about.

“As I have repeatedly said, the Security Council has primary responsibility for international peace and security,” Ban said at a news conference. “The use of force is lawful only when in exercise of self-defense in accordance with article 51 of the United Nations Charter and or when the Security Council approves such action.