McCain on Iraq: "No Good Option, Worst Option is to Do Nothing" 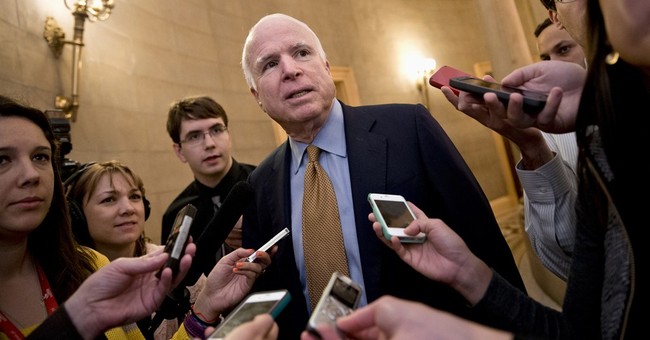 U.S. troops withdrew from Iraq just over two years ago, yet al Qaeda-aligned Sunni insurgents of the Islamic State of Iraq and Syria (ISIS) have since overtaken four Iraqi cities. In its attempt to redraw Middle East borders and create an extremist Islamic state, ISIS has seized Mosul, Tikrit, Fallujah, and Tel Afar.

Danielle Pletka, a foreign policy and defense expert at the American Enterprise Institute (AEI) sat down with Sen. John McCain (R-AZ) and Jack Keane, a retired four-star general and former vice chief of staff of the U.S. Army, to discuss viable options for the U.S. role in Iraq moving forward.

When asked what actions the administration should take in aiding the Iraqis, McCain asserts that the worst option is to let the situation continue to deteriorate into further chaos. Sending troops on the ground, he says, is not a viable option. Airstrikes could impact physical targets and create a psychological advantage over the enemy, yet they are far more complex to implement than people think. However, for the U.S. to do nothing is certainly not a feasible course of action.

Both Sen. McCain and General Keane do not believe that ISIS, despite the success it has had so far, possesses the “force generation” or combat power to take Baghdad. As Keane describes, Baghdad looks like Los Angeles in terms of the sprawling nature of the city. There are multiple egress and entrance routes and there are no terrain wedges other than the rivers that run through it.

It would therefore require an incredible military force to overtake the city and the estimated 10,000 ISIS militants simply do not have the capability to evict the central government. Instead, the insurgents will likely move around the belt of Baghdad and try to isolate the city.

We are seeing the results of the bad decisions that were made when the administration decided to not pursue maintaining a residual force in Iraq. With no continuing presence, the U.S. has lost any influence on Iraqi Prime Minister Nouri al-Maliki.

McCain believes the top priority is to stabilize the military situation in Iraq. He recommends that President Obama send key military leaders to help the Iraqi army secure Baghdad and mount a counter terrorist offensive to retake lost cities. However, the U.S. should also work toward a transitional government in Iraq. This would mean having Nouri al-Maliki step aside and be replaced with a more moderate Shia leader.