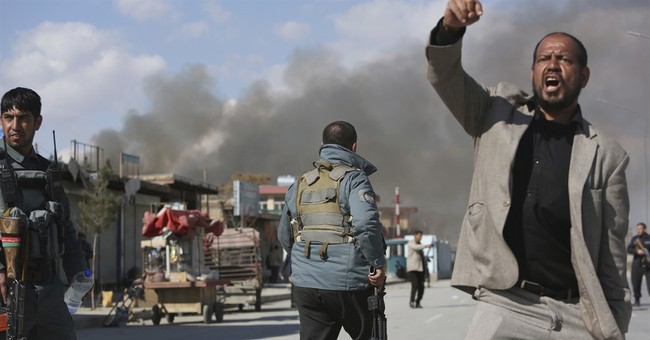 The Taliban is continuing its offensive in Afghanistan, taking another district center in the southern Helmand province on Thursday while an undercover Taliban spy turned his rifle on sleeping colleagues, killing nine Afghan policemen, according to the Department of Defense.

"The seizure of Sangin is a major tactical triumph for the Taliban," Michael Kugelman, senior associate for South Asia at the U.S.-based Wilson Center, said Thursday. The insurgent group "has taken over a major urban space in one of its major stronghold provinces, amplifying the major threat that the group poses to Afghanistan nearly 16 years after it was removed from power."

In September, the Taliban stormed into the capital of Afghanistan's southern Uruzgan province, sending all U.S. trained forces fleeing from the city.

At the time, a local shopkeeper said, "We civilians are fed up with both the Taliban and the government, we don't care who is coming and who is going, we just want peace."

This should come as no surprise however.  In April of 2016, the Taliban announced that their fighting season had begun and promised more "large-scale attacks" in their 15th year combating the United States.  They assured the local Afghan governments that areas under their control would remain civilized. "Mechanisms for good governance will be established so that our people can live a life of security and normalcy," the group said.

One may argue that bolstering the Afghan security forces with financial aid may help.  Think again.

Meanwhile, the Taliban, with no funding from Congress, is making a mockery of their opposition.