Trump Rips McCain: "He Shouldn't Be Talking About the Success or Failure of a Mission" 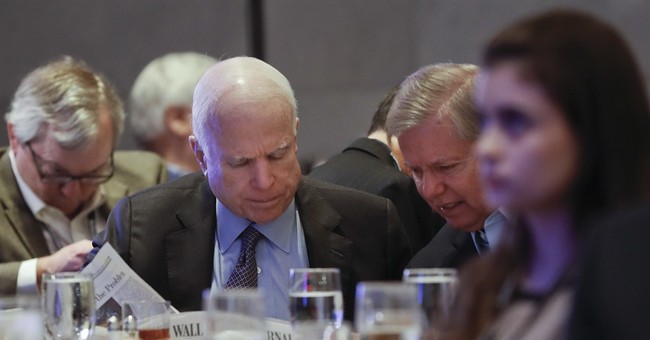 John McCain targeted the Trump Administration earlier this week calling the recent raid of a safe house in Yemen unsuccessful.

"While many of the objectives of the recent raid in Yemen were met, I would not describe any operation that results in the loss of American life as a success," he said in a statement.

White House Press Secretary Sean Spicer demanded the McCain apologize for his comments, claiming that he was disrespectful to the Navy SEAL who lost his life in the operation.  "It's absolutely a success, and I think anyone who would suggest it's not a success does disservice to the life of Chief Ryan Owens," Spicer said.

Sen. McCain should not be talking about the success or failure of a mission to the media. Only emboldens the enemy! He's been losing so....

...long he doesn't know how to win anymore, just look at the mess our country is in - bogged down in conflict all over the place. Our hero..

..Ryan died on a winning mission ( according to General Mattis), not a "failure." Time for the U.S. to get smart and start winning again!