Liberals and Progressives Disgustingly Cheer the Death of Rush Limbaugh 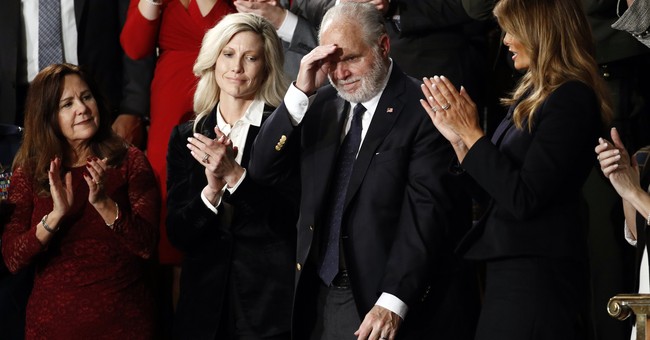 In a disappointing but not surprising moment, liberals and progressives took to social media to have a virtual street party to celebrate the death of Rush Limbaugh, who passed away on Wednesday morning at the age of 70.

"For over 32 years Rush has cherished you, his loyal audience, and always looked forward to every single show. It is with profound sadness, I must share with you directly our beloved Rush, my wonderful husband, passed away this morning, due to complications from lung cancer. As so many of you know, losing a loved one is terribly difficult. Even more so when that loved one is larger than life," Kathryn Limbaugh, his wife, said in a statement.

It did not take long for the online celebrations to take place on Twitter, with even "Rest in piss" trending alongside Limbaugh's name:

And on Ash Wednesday! Ok, you got me God. I'm Catholic again. I'm back.

Satan finding out Rush Limbaugh is on his way. pic.twitter.com/z76erc7k6h

love it when I get to read good news. rest in piss

It's easy to make fun of Rush Limbaugh right now, but it's important to remember that he also brought a lot of people a lot of joy by dying

Rush Limbaugh was a bigot and a misogynist who saturated America's airwaves with cruel lies and conspiracy theories for decades, transforming the GOP in the process.

If you're gonna read one obit, read @HuffPost's, from me & @nickrobinsearly https://t.co/ZoPJnGNG4g

Rush Limbaugh was a shitty, cynical person who did everything he could to make the world meaner, dumber, and more divided. I'm glad he's dead and I wish it had happened a lot sooner.

Happy Rush Limbaugh Is Dead Day! I didn't even get the chance to put my tree up!

A press release from UltraViolet, a national women’s advocacy organization, read "Women’s Group on Rush Limbaugh: 'Good Riddance,'" which went on to say, "Rush Limbaugh deserves to be recognized for what he was: a liar and misogynistic right-wing hack. For decades, the Rush Limbaugh Show was a personal soap box for Limbaugh to promote lies, conspiracy theories and baseless attacks, including justifications for date rape...We will never forget Limbaugh’s infamous attack on Sandra Fluke, who he referred to as a ‘slut’ and ‘prostitute’ for her testimony advocating for a contraception mandate before members of Congress."

In a statement, Angelo Carusone, president and CEO of Media Matters for America, said: "Rush Limbaugh made his career lying to his audience, stoking misogyny, and fueling racism. He entertained listeners by mercilessly mocking and maligning anyone who didn’t resemble his typical listener — straight, white, conservative, and male — and that cruelty eventually became a central tenet of modern conservatism. When confronted with facts that contradicted his right-wing worldview, Limbaugh promoted conspiracy theories and obvious lies. Limbaugh sold his listeners a false reality and we will be paying the price for it for a long time to come.

"In his final act, Limbaugh explicitly endorsed violence in the wake of the January 6 Capitol attacks."