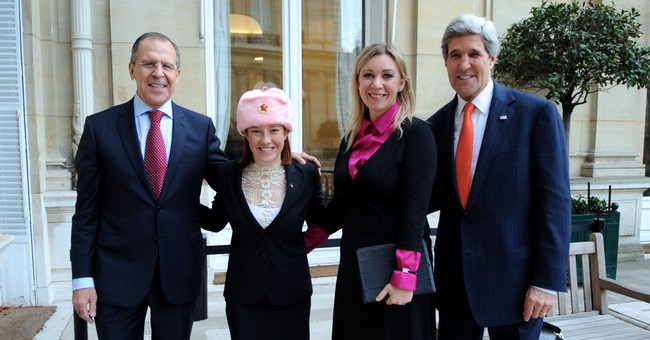 Joe Biden's pick for White House press secretary Jen Psaki accused people who shared a picture of her wearing a Russian hat, complete with the Soviet star featuring the hammer and sickle, of taking part in "Russian propaganda."

The picture was taken in 2014 when Psaki was the State Department spokeswoman. The hat was gifted to her by her Russian counterpart and they posed with then-Secretary of State John Kerry and Russian Foreign Minister Sergey Lavrov.

Russia responded w/ #Ushanka Hat gifted to @statedeptspox to stay warm&fancy during #US #winterstorm up to @Sochi2014 pic.twitter.com/yPmWTxydyE

In response to the online mockery, since Democrats have been screaming about Russia since President Trump has been in office, Psaki said the ongoing "Russian propaganda" is supposed to "discredit powerful messengers and to spread misinformation to confuse the public. Anyone who repeats it is (unwitting or not) simply a puppet of the propaganda machine."

For anyone who hasn't been the target of Russian propaganda (cc: @McFaul @HillaryClinton) the purpose is to discredit powerful messengers and to spread misinformation to confuse the public. Anyone who repeats it is (unwitting or not) simply a puppet of the propaganda machine.

This, of course, misses the point. Pointing out Psaki wore a symbol that represented a government that was unrepentant in the mass murder of millions while on official business is not "Russian propaganda." It is simply a fact. It happened and there is photographic evidence.