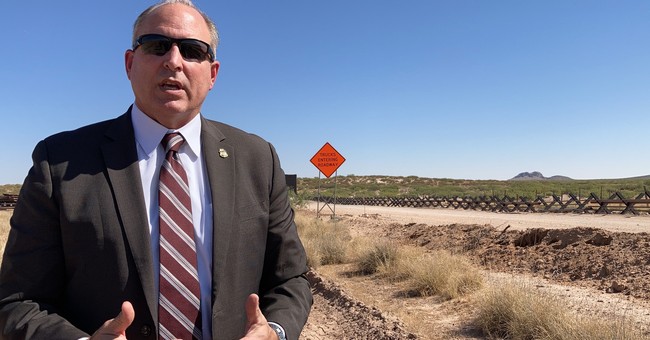 Acting U.S. Customs and Border Protection Commissioner Mark Morgan and Deputy Commissioner Robert Perez warned about the negative effects of a Joe Biden administration reversing some of the border policies, such as the construction of the new border wall system, the Trump administration has implemented.

Biden has promised his administration will stop the ongoing construction of the new border wall system, which Townhall recently toured in the El Paso Sector. Immigration activists want him to go a step further and tear down the new wall sections that have been built.

"This monument to racism, if you will, was built at a huge expense, wasting billions of taxpayer dollars, and I think it's just irresponsible not to do something to address that, because future harms are still in place," said Vicki Gaubeca, director of the Southern Border Communities Coalition, told The Arizona Republic.

"It's going to have a dramatic, negative impact," Morgan said during a conference call with reporters on Thursday. "We've been saying for awhile, the factual data and historical trends will support this, part of CBP's strategy...is in fact a multilayered strategy of infrastructure, technology, and personnel. The infrastructure piece, the wall is included in that piece. So it goes without saying, anywhere where we have implemented that multilayered strategy effectively of having infrastructure and technology and personnel, you have seen every possible data point improve."

"If you remove completely and stop completely and take out one of those critical parts of that multilayered strategy, it's just common sense that it's going to negatively impact our ability to accomplish our mission to protect the American people. Make no mistake about it. When you remove the tool, and that's what it is, the wall, it's going to have a dramatic negative impact across the board," Morgan added.

Perez, CBP's senior career official, echoed Morgan's concerns if wall construction is stopped. To date, over 400 miles of the new border wall system has been built in states like California, Arizona, New Mexico, and Texas.

Perez said the wall is critical in impeding and denying attempted border crossings, "That's what the wall system provides. That's what it does for our frontline agents."

Recommended
A Titanic Hearing on Covid
John and Andy Schlafly

Morgan pointed out that in the aftermath of 9/11, there was bipartisan agreement in Washington, D.C. that the southwest border needed to be more secured, which led to the Secure Fence Act of 2006.

"The very people now that are against building the wall, voted for the wall back then. It's beyond frustrating. And from my position, I can draw no other conclusion that this is nothing but politics and it's really unfortunate, in fact, it's quite disgusting that our ability to protect the American people is going to be negatively impacted because of politics," Morgan said.

Morgan further said if a Biden administration ends the Migrant Protection Protocols, commonly known as the "Remain in Mexico" policy, it will all but guarantee another crisis on the southwest border that will overshadow the one that occurred in 2018, "you can take that to the bank."