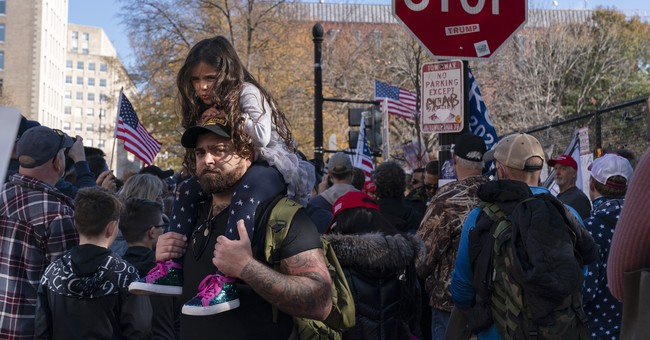 Rep. Hakeem Jeffries (D-NY) placed the blame on the violence that broke out in Washington, D.C. after the Million MAGA March concluded, which saw many Trump supporters being attacked and harassed, on President Trump.

Jeffries, who is the chairman of the House Democratic Caucus, said on Tuesday there was no need for Joe Biden to condemn the violence because he "has done a tremendous job during the campaign to make it clear, looting and rioting is not peaceful protesting."

"We support peaceful protesting. And we condemn all forms of violence, no matter where it originates. The problem that we confront is that the hater-in-chief has not done that. He plays footsie with white supremacists, with the Proud Boys, the Boogaloo Boys, the Good Old Boys, the Jim Crow Boys, and the out of control boys all the time," he continued. "But again, a long national nightmare is ending on January 20th, and so we feel good about where we are at and we will have a president who will bring us together, not one who constantly tears us apart."

Jeffries also said he had no comment on Rep. Ilhan Omar (D-MN) comparing Trump rallies to KKK rallies because "I don’t know the context within which she has made those remarks but we do know that many of Donald Trump’s rallies have resulted in violence, hatred has been spewed by none other than the president himself."

While the Million MAGA March was peaceful during the day on Saturday, once it became dark and Trump supporters were making their way back to their hotels or going to eat dinner, many were attacked by Antifa and BLM activists.

At least three large fireworks were thrown at Trump supporters who were outside eating.

Antifa/BLM continues to attack Trump supporters who are eating outside with fireworks in Washington, DC. pic.twitter.com/8k32VN4Sm7