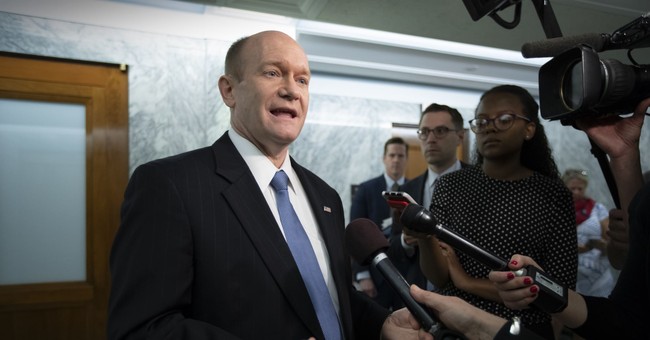 Despite Sen. Chris Coons (D-DE) expressing opposition to Senate Republicans moving ahead with the confirmation process of Judge Amy Coney Barrett to the Supreme Court, he later admitted she is a qualified candidate to fill the now-vacant seat.

"Well, we should not be racing ahead with this partisan process," Coon told MSNBC on Wednesday. "There is no precedent in our nation’s history for the Senate holding a confirmation hearing for a Supreme Court nominee this close, just 27 days, before a presidential election where people are already voting in more than half the states."

"I’ve been reading her opinions and law review articles and I’m increasingly convinced that she’s even more conservative than Justice Scalia for whom she clerked on the Supreme Court and she has demonstrated a willingness to reverse long-settled precedent," he added, saying the confirmation hearings should be delayed until after the presidential election.

"So you disagree with Judge Barrett on major policy issues, obviously, but do you think she’s qualified as a judge?" "Morning Joe" co-host Willie Geist asked.

"I think she is qualified as a judge. I think she’s going to be an engaging candidate," Coons admitted. "But, frankly, what matters here is not whether she’s taught at a well-regarded law school or whether she answers questions well. What matters is her judicial philosophy, how she will change the balance on the court, and what the consequences will be for tens or hundreds of millions of Americans."

Senate Republicans have stated they have the votes to confirm Barrett to the Supreme Court. The confirmation hearings will start on October 12.