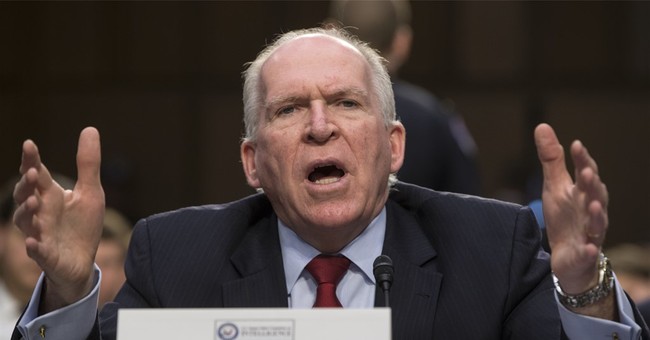 Former Central Intelligence Agency Director John Brennan urged for those in America's intelligence community to not give up and continue to carry out their jobs amid President Trump's plans to shake up the apparatus.

"I’m hoping that the intelligence professionals are going to continue to do their best to provide the intelligence and the analysis that the executive branch, as well as legislative branch, needs," Brennan told MSNBC on Friday. "They need to try to do it despite the headwinds they’re feeling coming from the White House. A lot of these individuals, I’m sure, are being intimidated and now will be pulling some punches because they don’t want to be shown the door. It is one thing for the senior professionals to be axed. But is the White House going to now start going further now in trying to remove intelligence professionals who are just trying to do their job but will face the wrath of a very vindictive Donald Trump?"

"What is your message then to your former colleagues who are still fighting the fight inside the intelligence services?" "Morning Joe" host Willie Giest asked.

"Carry out those responsibilities that you swore an oath to do. Because they have that very solemn responsibility, whether you’re in intelligence or a diplomat or in law enforcement, you need to carry out your responsibilities with the greatest integrity and honesty, and let the chips fall where they may. I would tell them not to go to the door, not to leave, but continue to do their work the best they can," Brennan said.

On his Twitter account, Brennan said the country is "a full-blown national security crisis" because Trump is "abetting a Russian covert operation to keep him in office for Moscow’s interests."

We are now in a full-blown national security crisis. By trying to prevent the flow of intelligence to Congress, Trump is abetting a Russian covert operation to keep him in office for Moscow’s interests, not America’s. https://t.co/Vj6lUV5ZNu

Trump has picked U.S. Ambassador to Germany Richard Grenell to be the acting Director of National Intelligence, which caused Democrats to go ballistic since Grenell has been dedicated to Trump's foreign policy goals.