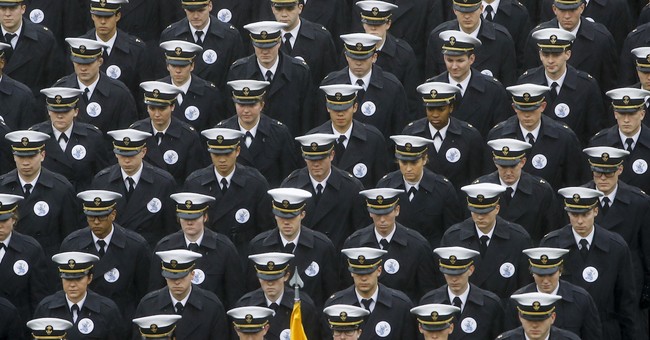 The U.S. Military Academy at West Point and the U.S. Naval Academy released the findings of their investigations into the cadets and midshipmen after people on social media accused them of making a white power symbol at this year's Army, Navy game.

The accusations were made after some in attendance made the OK hand gesture while on camera. The reports concluded the cadets and midshipmen were playing the "circle game," where someone makes the OK sign and tries to get their friends to look at it, and if they do, are able to punch their friend in the arm.

"The investigating officer concluded that the cadets were playing a common game, popular among teenagers today, known as the 'circle game' and the intent was not associated with ideologies or movements that are contrary to the Army values," West Point said in a press release.

"We investigated this matter thoroughly," said Lt. Gen. Darryl A. Williams, 60th superintendent, U.S. Military Academy. "Last Saturday we had reason to believe these actions were an innocent game and not linked to extremism, but we must take allegations such as these very seriously. We are disappointed by the immature behavior of the cadets."

"The investigator found that the game was being played in the stands before the ESPN host moved into the crowd. Based on the results of the investigation, those cadets involved will receive appropriate administrative and/or disciplinary actions," West Point's report continues.

The Naval Academy said its investigation reached the same conclusion, saying it found no racist connotations with the hand gesture after reviewing video footage, conducting dozens of interviews and background checks through the FBI and Naval Criminal Investigative Service.