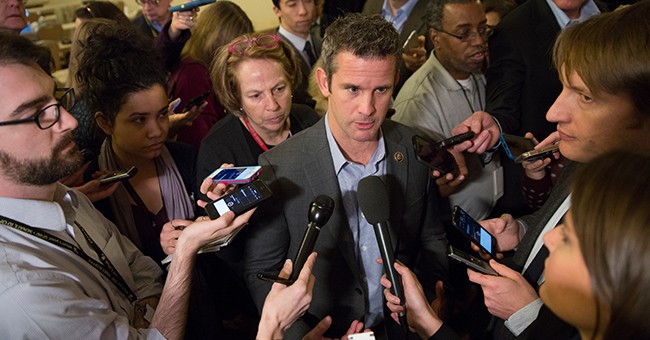 In a statement released by his communications director on Wednesday, it was revealed Rep. Adam Kinzinger (R-IL) was deployed to the U.S-Mexico border to fulfill his duties as a Lieutenant Colonel in the Air National Guard.

“Earlier this week, Congressman Kinzinger was deployed to the U.S.- Mexico border with his Air National Guard unit, and is serving on active duty in his capacity as a Lieutenant Colonel,” Maura Gillespie stated. “As his previous border missions while elected, the Congressman will stay in the United States.”

“The Congressman is humbled to serve his IL-16 community here in the People’s House and equally proud to serve as a reconnaissance pilot in the Air Guard. In both of these roles, Congressman Kinzinger fights to make our national security stronger, our border more secure, and our communities safer,” she continued. “As always, our Washington, D.C. and Illinois offices will continue to serve the people of the 16th District, and keep the Congressman updated while he serves his mission along the southern border.”

Prior to being elected to Congress, Kinzinger joined the Air Force in 2003 and was deployed to Iraq and Afghanistan, according to his website.

The governors of California and New Mexico withdrew the majority of their National Guardsmen from the border, stating they will not use troops for political purposes.

“We will support our neighbors where the need for assistance is great, and we will offer a helping hand when we can to those vulnerable people who arrive at our border, but New Mexico will not take part in the president’s charade of border fear-mongering by misusing our diligent National Guard troops. We will deploy our men and women in uniform only where there is a need, and where their presence can make a genuine difference in ensuring public safety and an easing of the humanitarian concerns at our southern border.” New Mexico Governor Michelle Lujan Grisham (D) said.

California Governor Gavin Newsom (D) called President Donald Trump’s characterization of the “emergency” situation at the border a “manufactured crisis” and his Guardsmen “will not be part of this political theater.”