California Governor Will Pull Most National Guard Troops From Border 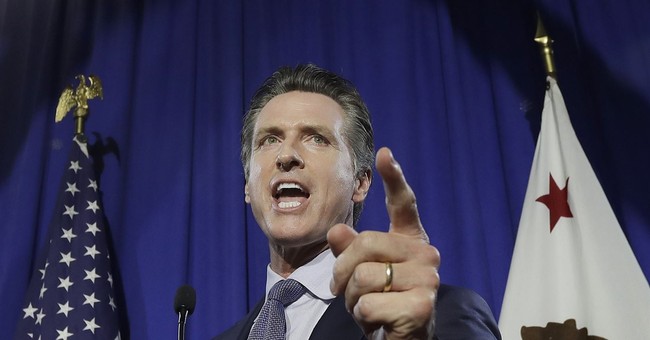 California Gov. Gavin Newsom will pull most of the National Guard troops from the border with Mexico, according to multiple reports.

The move is widely seen as an act of defiance of the Trump administration, with the governor set to call the president’s characterization of the “emergency” situation at the border a “manufactured crisis,” according to excerpts from his State of the State address to be delivered Tuesday.

He will also declare that “California will not be part of this political theater.”

According to the Associated Press, only about 100 troops will remain at the border.

About 100 of the 360 troops will remain deployed under California’s agreement with the federal government to focus specifically on combating transnational crime such as drug and gun smuggling, Newsom spokesman Nathan Click said. Specifically, they will be tasked with providing intelligence on transnational crime and assist with cargo dock operations and searches of commercial trucks for contraband.

Newsom’s move comes on the heels of New Mexico Gov. Michelle Lujan Grisham, also a Democrat, pulling back her state’s troops from the U.S.-Mexico border. The two state’s former governors agreed to send troops to the border last April at the Trump administration’s request along with Texas and Arizona.

Newsom’s and Grisham’s actions are a fresh, if symbolic, affront to President Donald Trump’s description of an immigration crisis on the nation’s southern border. (AP)

Former California Gov. Jerry Brown had agreed to deploy the National Guard troops last April under the condition that they "will not enforce immigration laws or participate in the construction of any new border barrier."

That mission was scheduled to end March 31. While Newsom will request the drawdown to begin immediately, he will still allow until the end of next month to do so.

Share this on Facebook
Tweet
How the Biden Administration Is Spinning Its Failure to Reach July 4 Vaccination Goal
Leah Barkoukis
Democrat Senator Whitehouse Gets Wrecked Over His Hypocritical Virtue Signaling on Race
Katie Pavlich
'State-Sanctioned Racism': Hawley Brings CRT 101 to the Senate Floor
Spencer Brown
Question for 'Progressive' Senator: Hey, Why Do You Still Belong to an All-White Club?
Guy Benson

Tucker Carlson Just Broke Don Lemon on Live Television
Townhall
'Conservatives AREN'T obedient': Eric Weinstein's thread dragging Big Tech for wanting control of what we think (and WHEN we think it) a must-read
Twitchy
Candace Owens and Brandon Tatum Are Not Who They Pretend to Be
Redstate
BREAKING: Kamala Harris Breaks Tie to Advance Confirmation of OPM Chief With CRT Ties
PJ Media