Heads Explode Over Where Ivanka Trump Sat, Ignore Her Work on Women's Issues at G-20 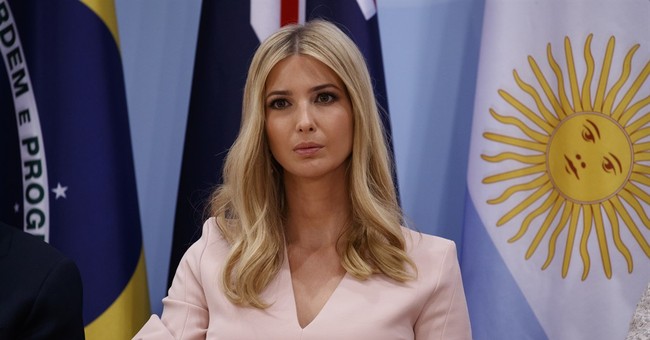 Saturday's Ivanka Trump news focused on a few minutes during a meeting at the G-20 summit in which she occupied the President's seat.

Ivanka Trump, unelected, unqualified, daughter-in-chief, is representing the US at the G20 summit next to May, Xi, Merkel. Photo @LanaLukash pic.twitter.com/fvs0EMy8z7

A slew of misogynistic hate-tweets were sent in reply to that tweet.

Not much attention has been given to another role Ivanka played at the summit, though.

Earlier Saturday, Ivanka participated in a panel discussion during the launch of the Women's Entrepreneur Finance Initiative, a project she's been working on with World Bank President Jim Yong Kim. President Trump announced that the United States would contribute $50 million to the fund.

Kim said the fund had raised more than $325 million so far for projects and programs to support women and women-led businesses by improving access to capital and markets, providing technical assistance, training and mentoring, and pushing public policy. The fund grew out of conversations between Ivanka Trump and Kim early in Trump's administration.

"This is not a cute little project," Kim said during a panel discussion, arguing the effort would spur real economic growth.

President Trump, Canadian Prime Minister Justin Trudeau and German Chancellor Angela Merkel also spoke at the event, where Trump said the fund would help eliminate barriers for women to launch businesses, help transform "millions and millions of lives," and "provide new hope to these women from countless communities all across the world."

"The critical investments we're announcing today will help advance the economic empowerment of women around the world," he said.

Most conservatives wouldn't be fans of $50 million being given to the World Bank for any reason. The program seems like it has the right goals, but it should be run through private charities. But it's the type of program the mainstream media normally fawns over, and the fact that all of the buzz is about Ivanka sitting in her father's chair for a few minutes just confirms their bias.