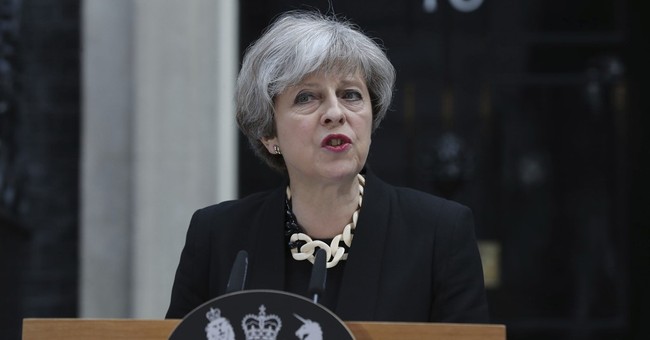 This year three terror attacks have been carried out in Britain, and May said five more have been thwarted. Clearly the current methods of preventing terror attacks aren't working, she said, and things need to change in four ways.

May said the recent attacks, while "not connected by common networks," were connected by the thread of extremist Islamic ideology which "claims our Western values of freedom, democracy and human rights are incompatible with the religion of Islam."

The first change, she said, was realizing that the solution is not a permanent counter-terrorism effort, but defeating the ideology itself through making people understand that "pluralistic British values" are "superior to anything offered" by an extremist ideology.

That doesn't seem like much of a change from current practice, except perhaps in clearly labeling who the perpetrators are and what their motivation is. (Note to former Obama administration staffers - she's saying they're not doing this because they need a job.)

Secondly, she called for an end of "safe spaces" online for extremists. Unfortunately, she is advocating for multinational agreements to regulate the internet to achieve this.

"We need to work with allied democratic governments to reach international agreements that regulate cyberspace to prevent the spread of extremist and terrorism planning."

Aside from the constitutional issues such an agreement would face in the United States, the amount of time it would take diplomats to negotiate what would probably be an ineffective agreement makes it a waste of time.

She did not mince words when talking about destroying real world safe spaces, the third change she called for.

"We must not forget about the safe spaces that continue to exist in the real world. Yes, that means taking military action to destroy Isis in Iraq and Syria."

One of the real world safe spaces they've found is in Britain, due to "tolerance" of an ideology that seeks to destroy western society - and that safe space needs to be eliminated as well, she said.

"[T]here is - to be frank - far too much tolerance of extremism in our country. So we need to become far more robust in identifying it and stamping it out across the public sector and across society. That will require some difficult, and often embarrassing, conversations."

Lastly, she called for a full review of Britain's counterterrorism strategy and implementation of any necessary changes.

She closed by saying that British society should continue to function as it normally would, except when it comes to extremism and terrorism - that "Enough is enough."