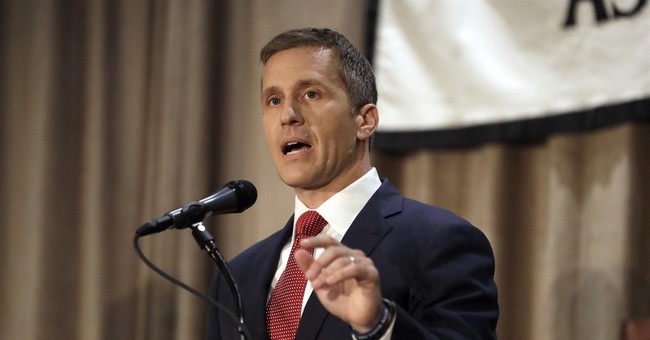 Of the twelve races for governor across the country, perhaps none are more interesting than the gubernatorial match-up in Missouri. Republican newcomer Eric Greitens is facing off against career politician Democrat Chris Koster. The oddity: Greitens used to be a longtime Democrat and Koster was a Republican statesman before 2007.

The classic match-up of anti-establishment candidate versus career politician can sum up the difference between Greitens and Koster. Republican Greitens may have not held a political seat in his life, but he boasts a resume that any man running for office would drool over: a former Navy SEAL and combat veteran, founder of The Mission Continues (a non-profit helping veterans), and he was listed as one of the world world’s 50 greatest leaders in 2014 by Fortune Magazine. It’s safe to say Greitens has a lot to brag about. During his time in the private sector he was more-or-less a Democratic activist, and many thought he would run for a congressional seat as a Democrat. He joined the GOP just a few years ago.

Koster may not have as many personal accomplishments, but he touts over 20 years of work in elected office. He served a decade as Cass County prosecutor as a Republican. He then was elected (as a Republican, again) to the Missouri State Senate – even becoming caucus chair. He switched parties in 2007, citing strong disagreement with Republicans on labor rights.

Obviously there is potential for cross-party appeal for both candidates. Missouri is a red state and, like many successful Democrats before him, Koster has had to establish himself as a right-leaning Democrat to be viable. It’s certainly possible this strategy would work - the sitting governor, Jay Nixon, is a Democrat himself.

In a year where the outsider image has strong attraction to voters sick of politics-as-usual, Greitens is hoping to capitalize on the anti-establishment wave.

The Real Clear Politics average has the race at +.5 for Greitens. A total nail-biter.