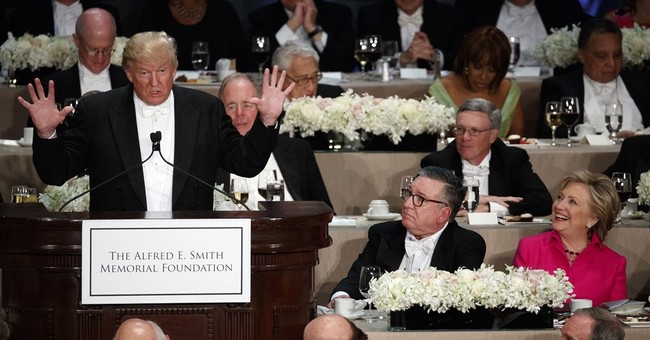 If you watched the Al Smith Dinner Thursday night, you would have seen a night of fun laughs and witty humor. However, some of the jokes got a bit awkward for Clinton and Trump - who have run a pretty rough campaign thus far.

Here are some of the highlights from the two candidates:

Trump: “And even tonight, with all of the heated back and forth, between my opponent and me at the debate last night, we have proven that we can actually be civil to each other. In fact, just before taking the dais, Hillary accidentally bumped into me and she very civilly said, ‘Pardon me.’ And I very politely replied, ‘Let me talk to you about that after I get into office.’”

Trump: "You know, last night, I called Hillary a 'nasty woman,' but this stuff is all relative. After listening to Hillary rattle on and on and on, I don’t think so badly of Rosie O’Donnell anymore. In fact, I’m actually starting to like Rosie a lot.”

Trump: “You know, the president told me to stop whining, but I really have to say, the media is even more biased this year than ever before — ever. You want the proof? Michelle Obama gives a speech and everyone loves it — it’s fantastic. They think she’s absolutely great. My wife, Melania, gives the exact same speech — and people get on her case.And I don’t get it. I don’t know why.”

Clinton: “It’s a special honor to be here with Your Eminence. Now I know, Your Eminence, you were criticized for inviting both Donald and me here tonight, and you responded by saying “If I only sat down with those who were saints, I’d be taking all my meals alone. Now, just to be clear, I think the Cardinal is saying I’m not eligible for sainthood. But getting through these three debates with Donald has to count as a miracle.”

Clinton: “People look at the Statue of Liberty and they see a proud symbol of our history as a nation of immigrants, a beacon of hope for people around the world. Donald looks at the Statue of Liberty and sees a ‘four.’ Maybe a ‘five’ if she loses the torch and tablet and changes her hair. You know, come to think of it, you know what would be a good number for a woman? Forty-five.”

Clinton: “Now, you notice there is no teleprompter here tonight, which is probably smart, because maybe you saw Donald dismantle his prompter the other day. And I get that. They’re hard to keep up with, and I’m sure it’s even harder when you’re translating from the original Russian.”

Clinton:” It is great, also, to see Mayor Bloomberg here. It’s a shame he’s not speaking tonight. I’m curious to hear what a billionaire has to say.”