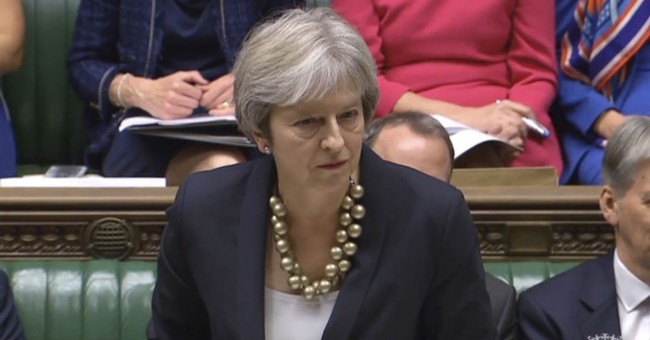 Prime Minister Theresa May failed to gain support from members of Parliament Thursday over renegotiations with the EU for her Brexit deal.

“Tonight’s vote shows there is no majority for the prime minister’s course of action in dealing with Brexit,” Labour Party leader Jeremy Corbyn said. “Yet again her government has been defeated. The government cannot keep on ignoring parliament or plowing on towards the 29thof March without a coherent plan.”

The government lost in a 303 to 258 symbolic vote. While it’s non-binding and the government can continue to discuss changes with the EU, the vote serves as a major hit to May’s reputation in parliament. According to Reuters, “the numbers will undermine EU leaders’ confidence that May can win parliament’s support for a revised agreement.”

Just last month, MPs made a historic vote against the May’s original plan, in a 432 to 202 decision. Townhall’s Cortney O’Brien reported that it was, “the largest defeat in the House of Commons in modern history.”

The original withdrawal agreement would have created a transitional period until the end of 2022 to give the UK and the EU more time to discuss a trade deal. But there’s a catch. It would mean that the UK would still be part of the EU’s single market and customs union. They would have to follow the EU’s rules and contribute to its budget but will not have say in how those rules are implemented.

It was a situation that seemed to mirror what our country faced with Great Britain back when we were just a set of colonies: taxation without representation. EU stated that it will not renegotiate the withdrawal agreement.

Time slips away as the UK plans to leave the EU by Mar. 29.