Flashback: That Time Joe Biden Said His Administration Had Gotten the Border Under 'Control' 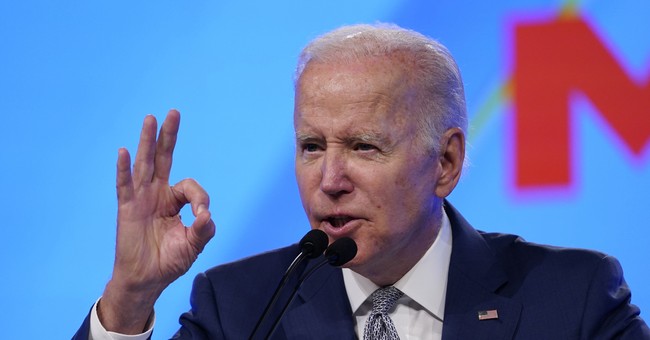 This was in the spring of 2021, back when the president would occasionally sit for interviews with journalists, which he hasn't done this year since early February.  Biden's last news interview was conducted on February 10th and aired on Super Bowl Sunday.  It's been well over four months.  But last year, when the border crisis was bad -- but not nearly as bad as it's gotten since -- he told NBC's Craig Melvin that his administration had "gotten control" of the situation at the Southern Border:

BIDEN, more than a year ago: “We’ve now gotten control” at the southern border.

That was a lie. pic.twitter.com/UkCBY26fZC

When he said those words, the previous month's (March 2021) official number of border encounters by US officials was just over 172,000, a "71 percent increase" over the February 2021 total, per Customs and Border Patrol.  As Julio mentioned yesterday, more than a year later, here's what border "control" looks like:

Record-setting 239k+ apprehensions in May, less than half expelled. This does not count tens of thousands of known “got-aways.” An absolute disaster. The border crisis is raging & Team Biden is focused on dreaming up “administrative” infractions against US agents they’ve smeared. https://t.co/qR1eKhe05y

The smeared agents reference is explained here, if you're unfamiliar with that episode.  More perspective from Bill Melugin, including what his sources are saying about the surge in 'got-aways:'

It is out of control.  By design.  One-and-a-half million illegal crossings since October, a stark increase over last year's record-setting clip.  That's roughly equivalent to the entire populations of Wyoming and Delaware combined.  Last month, a Yankee Stadium sellout crowd's worth of known 'got-aways' entered the US with impunity, knowing that it will be very difficult to be deported, under the Biden administration's announced policies (currently under challenge in the courts) that bar or limit deportations even of illegal immigrants subsequently convicted of committing certain additional crimes.  More:

As a reminder, these are known 'got-aways,' meaning people who were spotted or detected by US officials, who lacked the capacity or manpower to intercept those people.  There is another universe of unknown got-aways who sneak into America totally undetected.  It's impossible to quantify how many of these people exist.  It stands to reason, and law enforcement officials confirm, that those who try to avoid detection and apprehension are more likely to pose public safety or national security threats.  These individuals often pay larger sums of money to the drug cartels that control the flow of humans across the border -- which is a booming business:

The Del Rio Sector has seen a recent increase in criminal apprehensions.
In the past 7 days, agents have apprehended 5 convicted sex offenders & 1 migrant w/ child pornography.
When we put agents out on patrol, this is the result. Protecting our communities 24/7 is our priority. pic.twitter.com/kvBmiMRWv2

Neither of these 'got-away' groups include the enormous number of people who were processed and released into the United States, to the tune of six figures every month, at this point.  Many of them never show up for scheduled court dates.  As of six weeks ago (excluding, the total estimated number of illegal immigrants who sneaked into the country, or were released into the country by authorities, since Biden took over was more than 1.4 million.  Between the April and May numbers, that number has swelled dramatically, with nearly half-a-million encounters occurring over those months alone.  Nearly 100,000 were released just in May.  I'll leave you with the latest update on the administration's insulting and quixotic "root causes" gambit, about which the Vice President is still prattling on:

The leaders of those countries skipped the Summit of the Americas in Los Angeles last week, whose focus was migration.