What Is Wrong with Eric Swalwell? 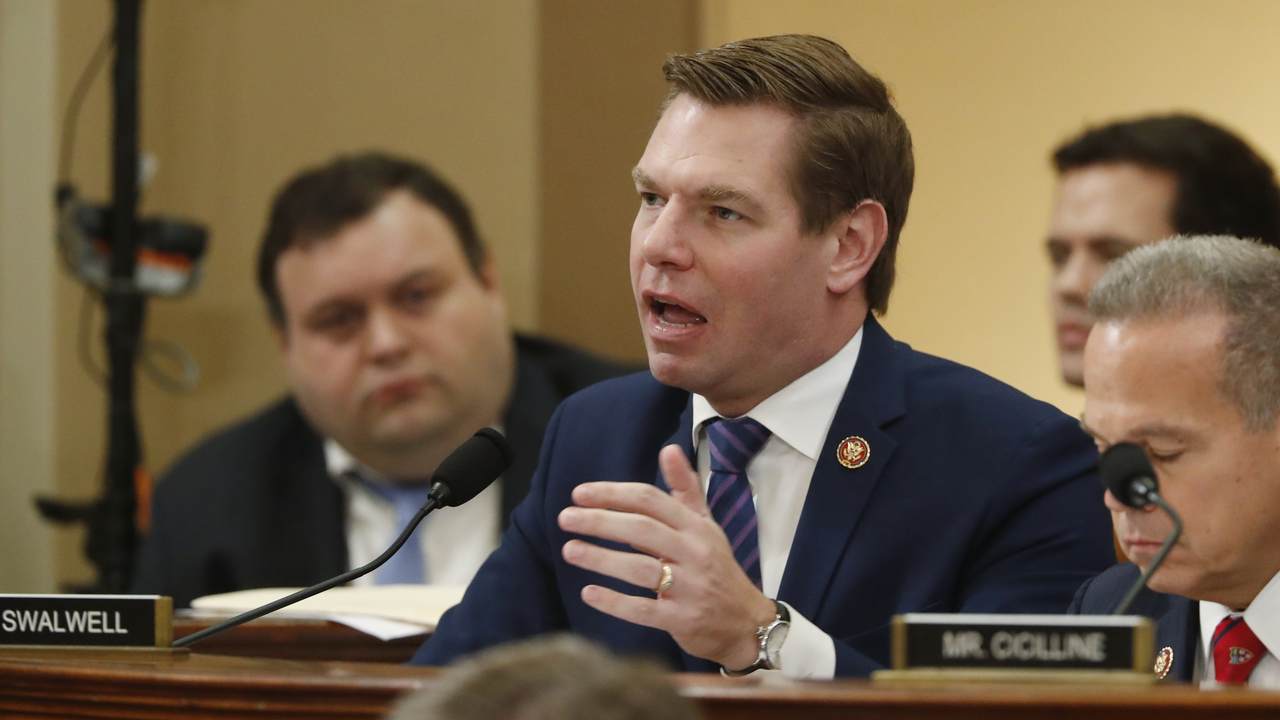 I'll admit that I don't spend much time thinking about Eric Swalwell, the backbencher Democratic congressman from California whose third-tier 2020 presidential run crashed and burned. His presence on cable news is ubiquitous – and sometimes hilarious – but it's his social media histrionics that have caught my attention recently. It's true that quite a few politicians make fools of themselves on Twitter, but in this realm, Swalwell has truly distinguished himself.

This recent instance of stupid pettiness helps illustrate his brand as a self-absorbed troll:

Hi @Twitter, “@RepDougCollins” hasn’t repped anything in awhile. Doug got pounded in the GOP Georgia senate primary by @KLoeffler (who got pounded in the general election by @ReverendWarnock). Most Georgians wouldn’t know Doug Collins from Tom Collins. Let’s strip the blue check. https://t.co/b6LCUKycWJ

Former representative Collins had dunked on Swalwell with a reference to Communist China, which might be a bit of a sore spot for the Californian. After all, his circle was famously infiltrated by a CCP spy, a revelation accompanied by quite a lot of speculation that their relationship went well beyond a professional friendship. Nevertheless, Swalwell remains a member in good standing on the Democrat-controlled House Intelligence Committee. The congressman's big comeback was to ridicule Collins for losing a Senate primary campaign in 2020, which ultimately led to the seat being picked up by a Democrat (I'm not sure a two-point race constitutes a pounding, but I'm not sure rhetorical precision is a strong point of emphasis for Swalwell). I do find it odd that this was the particular counterpunch he selected, however, given how his own pursuit of higher office went in the exact same electoral cycle:

Exactly three months after announcing his presidential bid, Representative Eric Swalwell of California became the first serious Democratic primary candidate to end his campaign...Democrats had fretted over the possibility of a drawn-out primary battle, but strategists, politicians and officials are growing more confident that the field will narrow soon after the Iowa caucuses in early February...Despite his best efforts — a gun control platform, videos of changing diapers, aggressively going after former Vice President Joseph R. Biden Jr. in the debate — Mr. Swalwell struggled to gain traction in the race...Mr. Swalwell’s exit may be a harbinger for other ambitious politicians failing to make a dent in the 2020 race.

The word "serious" is doing a lot of work there and reminds us that straight news should try to avoid outlandish editorializing. Shortly before dropping out of the race, Swalwell was polling at less than one percent nationally among Democrats. He didn't even come close to making it to Iowa. In fairness, then-Sen. Kamala Harris also failed before Iowa, and look what that got her. Meanwhile, in the wake of the horrible mass shooting by a hardcore racist in Buffalo this month, Swalwell – apparently without any self-awareness – served up a genre of tweet that has been widely mocked for years.  He continued in the same vein after this week's atrocity in Texas. Let's call it the "my woke baby just allegedly said something that happens to align perfectly with my own ideological priors" template. And this one was a doozy:

My 4-year-old just FaceTimed to ask what I’m doing to “help the people in Buffalo” and “why did the bad man do this?” Absolutely gutting. This cannot be his normal. It’s time to BAN ASSAULT WEAPONS. #EndGunViolence

Some of the responses were entertaining, including another round of jeering after the congressman followed up with "proof" in the form of a photo of one of his very young children watching a post-massacre press conference on CNN. I'm not yet a parent and don't have much to say in the way of criticizing other people's parenting decisions – but I'd like to think that I'd do my best to shield my own pre-K child from the evils and horrors of the world as much as possible, for as long as possible. But that's just me. I'd also try to avoid deeply ugly and somewhat related humiliations like this:

Sorry @housegop that the parishioners hog-tied your boy. #SorryNotSorry https://t.co/y71ywlLn6N

"Your boy," Swalwell taunted Republicans, referring to the gunman in a separate mass shooting that occurred on the very same day, this time in his own state. As it turns out, the alleged shooter in that incident was a Chinese immigrant with CCP ties who believes the regime in Beijing should take over Taiwan. The church he attacked hosts a Taiwanese congregation. The tweet above remains live. The congressman's partisan smear would have been disgusting even if the killer was a registered Republican in a MAGA hat. Was Steve Scalise's attempted assassin "your boy," Eric? That lunatic was a hardcore leftist and an avid consumer of content from media outlets on which Swalwell has made frequent appearances. But guilt-by-association blame games like this are gross and unfair.

Swalwell's smear, in this case, became downright embarrassing when its breezily-assumed premise was quickly debunked by information about the shooter's identity and motives. The elected official who hurriedly published it couldn't be bothered to wait for said information to emerge, so eager was he to slime his colleagues. And how unfortunate for him that there ended up being a China connection, to boot. As noted above, that's an awkward subject for him. All that being said, I'll leave you with a reminder that in spite of his frequent efforts, Eric Swalwell cannot even be crowned as most cringeworthy politician from his home state, let alone in the entire country: