Commentary: Censure the President. Don't Remove Him From Office. 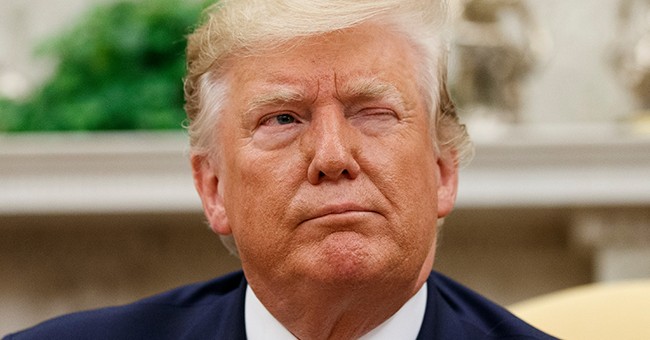 There are two fundamental questions that must be addressed regarding President Trump's actions vis-a-vis Ukraine, setting aside the constant, secondary skirmishes over process:  First, did the president's conduct -- and the actions of his administration -- amount to an abuse of power?  And second, if so, what should be done about it?  For weeks, since the transcript of the fateful call between Trump and his Ukrainian counterpart was first made public, I've taken a dim view of Trump's request that the Ukrainian government investigate the Bidens.  I've called it a 'misuse' of foreign policy-making authority, an 'abuse,' and even 'corruption.'  Additional emerging evidence has only fortified my conviction that what Trump was seeking, and how he was seeking it, was wrong.  Not "perfect," not "normal," and not merely ill-advised or misguided.  It was deeply, profoundly, obviously wrong.

The President of the United States -- personally and directly, as well as through multiple official and unofficial proxies -- insisted that in order for Ukraine's government to receive certain desired outcomes, they would have to launch, or at least announce, a corruption probe aimed at the family of Trump's most formidable (on paper) domestic potential challenger.  This is different than requesting that allied governments merely root out corruption, as there is scant evidence that Trump is remotely offended by corruption that does not negatively impact him.  This is different than demanding that allied governments cooperate with legitimately-predicated federal probes into corruption or misconduct, as is currently and appropriately taking place.  This is different than any of the countless quid pro quo's that are presented in the course of conducting normal foreign policy, which are, at minimum, plausibly proposed in pursuit of the nation's interests, not just the president's individual and political interests.

After repeatedly mouthing the mantra 'no quid pro quo' for days on end, some Trump defenders have shifted to drawing distinctions among different quid pro quo's, or suggesting that certain quid pro quo's don't matter.  I actually agree, partially.  Trump's eagerness for an internal probe of how Ukraine meddled in the 2016 US election is understandable and justifiable, certain conspiracy theories notwithstanding.  Attaching anti-corruption strings to sought-after presidential photo-ops, or even foreign aid, is also defensible.  The core problem here was linking policy decisions to an action (or, again, a publicly-signaled forthcoming action) that seems virtually entirely designed to cause political problems for a rival politician at home.  Things would get even more hairy if the policy decision in question entailed the intentional withholding of military aid destined for an ally under ongoing threat from a mutual adversary.

Yes, there are mitigating factors: The Ukrainians evidently didn't realize the military aid was being slow-walked until well after the infamous phone conversation between the two leaders took place, so they were blissfully ignorant of the would-be quid pro quo as it was being ham-handedly cooked up.  Beyond that, the Biden probe Trump so dearly wanted was neither announced nor undertaken.  And the planned military assistance did end up flowing to Kiev.  Neither end of the quid pro quo was ultimately carried out (update: according to the New York Times, we now know why, and it's not helpful to Trump).  This is somewhat redolent of Trump's attempts at obstruction on the Russia probe.  The endlessly-alleged underlying crime or offense -- 'collusion' -- didn't occur, and the president's impulsive, impetuous, obsessive attempts to impede and derail the probe were variously thwarted, aborted, or abandoned.  But that doesn't mean that the intent, with affirmative steps taken, to do flagrantly unethical or potentially illegal things isn't a scandal unto itself.

Many Trump supporters will loudly disagree, but my review of the transcript, and the detailed testimony from several administration officials with firsthand knowledge of the situation, lead me to the conclusion that this was, at best, an attempt at serious misconduct.  At worst -- for instance, if hard evidence (beyond the mounting testimony) turns up of a Biden-probe-for-military-aid quid pro quo -- it's arguably impeachable corruption.  Either scenario, coupled with the mitigating factors discussed above, leads me to the second question posed above: What can or ought to be done about it?  I believe that impeaching and removing a sitting, duly-elected president, especially along party lines, is one of the most draconian and divisive political outcomes for which our constitution allows.  Despite a clear shift in public opinion in recent weeks, a good deal of data suggests that an outright majority of the country is still highly reticent about applying that form of punishment to this president, over these actions. This is especially true within the context of a presidential election on the horizon, within less than one calendar year.  To wit:

"Most Americans (59%) agree with the statement that “if you want Trump out of office, it makes more sense to focus on next year’s election rather than go through an impeachment process now."https://t.co/rP9quvVOZD

I find myself well within the mainstream of the broad electorate's views.  Like many others, I'm disturbed by what we're learning, yet not convinced that attempting to evict Donald Trump from office is the proper recourse, even if there's a cogent case to be made that it might be warranted.  As I've written previously, "[the Ukraine] episode once again reflects poorly on Trump's judgment, ethics and fitness," but "Americans elected a reckless and unethical man in 2016.  He has proceeded to do some reckless and unethical things.  If voters have had enough, and prefer the alternative, they can express as much at the ballot box in almost exactly 12 months."  That being said, I also find the following argument compelling: Congress has a duty to draw a line in the sand over certain executive conduct.  Simply saying, 'if it's bad enough, the people will throw them out next election,' doesn't necessarily suffice as a deterrent to future wrongdoing, or as a meaningful bulwark against normalizing abuses. That's why I'm inclined toward the option of a formal censure:

Censure is a reprimand adopted by one or both chambers of Congress against a Member of Congress, President, federal judge, or other government official. Censure of a sitting Member of Congress is a formal disciplinary action, which is authorized by the Constitution. Non-Member censure, however, is not a disciplinary action, and it is not addressed in the Constitution. It is simply a means to highlight conduct deemed by the House or Senate to be inappropriate or in violation of the position held.

This course of action, which has only been specifically applied to a sitting president once in our history (and quite rarely against members of Congress) may be derided as a slap on the wrist.  And in some ways, it is.  But it would also represent a severe and formal condemnation from the people's branch, and would constitute a stain on the president's term in office.  It has been, and still should be, used sparingly.  I've come to believe that these circumstances justify it.  It might allow (or, thought of another way, it might force) some members of Congress who aren't willing to endorse impeachment and removal to instead explicitly codify the nebulous 'concerns' they've expressed throughout this ordeal.  That exercise could be clarifying and useful unto itself.

The president and various figures around him, including some within a dodgy shadow foreign policy apparatus, tried to coercively solicit totally inappropriate political help from a foreign government, quite possibly in exchange for critical military aid that had been specifically approved and appropriated by Congress.  Based on everything we've seen so far, I cannot be convinced that this represents anything less than an abuse of power.  But I am also unconvinced, thus far at least, that it rises to such an extreme level as to demand the uprooting of a sitting president, whom the people installed -- and for or against whom the people will soon render another electoral verdict.

Given the current political climate and various dynamics at play on both sides of the aisle, I'm under no illusions that this will ultimately transpire.  Democrats know that their base demands more; Republicans know that their base would revolt over such a public rebuke of the president, egged on by the president himself.  Nevertheless, a censure represents a fair and proportional resolution to the current challenge, in my view.  Censure the president.  Don't impeach and remove him.  Then let voters decide whether he deserves a new term in office.