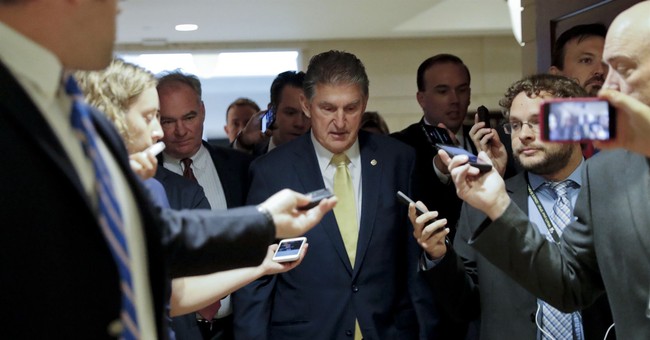 Over the course of months of intense lobbying from journalists, leftists and elected Democrats -- all of whom play for the same partisan team -- West Virginia's Democratic Senator has grown fed up.  He's answered questions seemingly every day about his appetite for altering or ending the filibuster, a procedural tactic used by the upper chamber's minority party to kill off legislation that cannot attract 60 votes.  Until last week, Democrats had been the sole practitioners of filibusters for the last six-plus years, using the tool to doom GOP bills on abortion, border security, COVID relief, and police reform, among numerous others.  But now that Democrats wield exceptionally narrow control over Congress, they have turned en masse against the filibuster, despite their recent, frequent use of the maneuver, and despite most of them publicly pledging to protect the filibuster (during the early days of the Trump administration, when Republicans controlled the federal governing trifecta).

But today's fleeting political dynamics have led Democrats to abandon their previous position.  Eager embracers of the filibuster like Barack Obama, and erstwhile staunch filibuster defenders like Joe Biden, have decided that it's suddenly a problematic "Jim Crow relic."  Biden this week griped that he's unable to ram through his agenda because his party's majorities are too narrow, targeting two Senators in particular for criticism.  In doing so, he lied about the voting records of both Manchin and Arizona's Kyrsten Sinema:

In his remarks on his stalled agenda in Congress, Biden claimed it is being slowed by two Dem "members of the Senate who vote more with my Republican friends.”

Despite the pair’s past voting record and public disagreements with Biden, when it comes to actual votes cast during the Biden administration, it’s been a completely different story: Both have voted in line with Biden’s agenda 100 percent of the time. While Manchin and Sinema may not toe the party line on every issue and have records more bipartisan than many of their colleagues, , it is false for Biden to claim that the pair have voted with Republicans more often than Democrats during his presidency.

They've been 100 percent supporters over the first four months of this presidency, and in return, the president has effectively called them Republicans.  Both have primarily bucked their party on the filibuster issue, frustrating Democratic designs to railroad massive and consequential "progressive" bills through a 50/50 Senate.  Manchin, month after month, day after day, has been inundated with questions on the subject, and he's consistently said he's not open to changing Senate filibuster rules.  He's been harangued about it so often that he's occasionally expressed frustration about the relentless lobbying effort -- and that's what this is: Lobbying, not journalism.  Just as members of the press lobbied President Biden on the filibuster in order for their preferred legislation to succeed, they've pounded away at Manchin with a continuous barrage "questions," hoping that the endless bombardment might chip away at his resolve.  Exhausted by this, the West Virginian published an op/ed in the Washington Post earlier this spring, evidently hoping to settle the matter once and for all:

Senator Joe Manchin III of West Virginia, a key moderate Democrat, on Wednesday reaffirmed his vow to protect the filibuster in the evenly divided Senate and suggested reluctance to his party repeatedly using a fast-track budget process to advance legislation without Republican votes...In an opinion piece published in The Washington Post, Mr. Manchin vowed that there was “no circumstance in which I will vote to eliminate or weaken the filibuster,” and he urged party leaders to compromise on legislation instead of trying to work around Republican opposition. Ten Republicans are currently needed to join all Democrats in a 50-50 Senate to pass major pieces of legislation through the regular process.

Rather than putting the issue to rest, the lobbying has only intensified. Here are a handful of examples from just the last few days alone:

Joe Manchin: “I don’t know what you all don’t understand about this. You ask the same question every day.” https://t.co/OcSUpTcutc

Here's my story on Joe Manchin, in which:

NEW: Pressure mounts on Manchin as ‘panic’ sets in among Democrats over voting rights.

I'm somewhat amused by the Post's "panic" angle, as if the fate of the disastrous HR 1 is some sort of shock.  The awful legislation doesn't even have 50 votes in the Senate, let alone 60.  The bill's fate is so sealed that they've put Vice President Harris in charge of the quixotic project.  But this supposedly newfound "panic" is a fresh reason to lobby Joe Manchin to do something he's ruled out dozens, if not hundreds, of times.  Worth a shot, the journalist activists must tell themselves.  Here's another solid point about the charade, made by two lefty analysts:

More generally, there's this weird thing that's going on with the HR1 push: there's not really much evidence of an effort to craft a proposal with a real chance of success, despite advocates insisting on the urgency of doing something https://t.co/sdbFNhQVK6

They're not interested in compromise.  They're hoping they can use pressure campaigns and over-the-top scare tactics to bulldoze Manchin and Sinema into breaking their word and pulling the 'nuclear' trigger so they can do whatever they want on the most divisive issues in the country without any GOP input for at least the next year-and-a-half.  It's that simple.  Anyone still waiting for Biden's promised "healing," "unity" and "working together" is going to have to keep waiting.  The journalists need some more time to try to wear down their party's dissenters.