Fundamental Truths About the Israel-Hamas Conflict 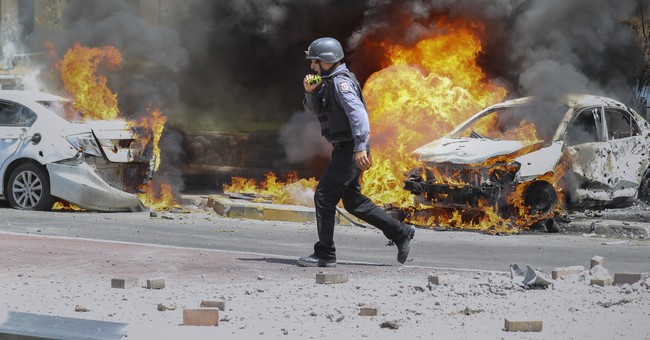 I'll openly admit that I'm deeply biased on the "issue" of Israel defending itself against terrorist aggression. I'm biased in favor of the truth and against terrorism. I'll also openly admit that it's difficult for me to view apologias for terrorism as anything other than contemptible, regardless of whether people arrive at them through ignorance or malice. Yes, it's fair to note that the history is complex and stretches back millennia. But for the purposes of making moral judgments, it's really not overly complex.

Israel is a sovereign nation and has a right to exist and defend itself. One can caterwaul about the supposed injustices of Israel's modern-day inception – there are valid counterpoints, including the obvious necessity of a Jewish state as a refuge after the horrors of the Holocaust – but that doesn't change the reality. One can fulminate against the supposed unfairness of Israel's present-day borders – again, there are compelling counterpoints, including that various expansions were won during defensive wars, and could actually be far more expansive – but land has never been the real issue. When Israel unilaterally cedes territory in the name of peace, its enemies escalate. Every time Israel has offered extremely generous land concessions in pursuit of a two-state solution, Palestinian leaders reject the offers and refuse to disavow terrorism. They refuse to recognize Israel. They demand its elimination. Everything else is noise, even though the details nearly always vindicate Israel and implicate its enemies.

It certainly is a "vicious cycle," and the overwhelming moral culpability lies with Palestinian leaders, both from the terrorism-supporting Palestinian Authority in the West Bank, and from Hamas, the bona fide terrorist organization that runs Gaza (from which Israel withdrew in an ill-fated 2005 move). Beyond the genocidal maniacs who don't believe Israel should exist, everyone else at least pretends to concede that the Jewish state has the right of self-defense. But many of Israel's critics seem to object every time Israel exercises that right, no matter how they do so – routinely and predictably muddying the waters with grotesque moral equivalencies, half-truths, and outright lies. As for the latest deadly spasm in this saga, Noah Rothman lays out the factual backdrop:

This particular flare-up began with a court case. It followed a years-long effort to adjudicate claims made by Israeli settlers seeking to evict six Palestinian families from homes they’ve occupied in East Jerusalem since the end of the war that followed Israel’s independence in 1948. The settlers claim that they paid for and own the land, which had been expropriated in wartime. The Palestinians argue that all this legalese is a smokescreen masking Israeli expansionism. It is not for us to decide who is right; this is a matter before Israel’s independent judiciary. That process was not even allowed to conclude before the violence began. A contrived campaign to rally East Jerusalem’s Palestinians against the effort to “Judaize” their city sprang up even before Israel’s supreme court was set to issue a ruling on the matter—which just happened to coincide with the canceling of West Bank elections once the ruling Palestinian Authority came to believe it would lose them. Last week, clashes erupted after Friday prayers on the Temple Mount complex. Palestinians armed with rocks and explosive devices attacked Israeli police from within the Al-Aqsa Mosque, and Israeli police responded with rubber bullets and tear gas. As the violence spiraled, the court suspended proceedings, pro-Israel activists canceled a potentially inflammatory march through Arab sections of East Jerusalem, and Israeli police curtailed Jewish citizens’ access to the area. But the unrest continued through the weekend and into this week.

Hamas, the terrorist entity that governs Gaza, took the opportunity to fire off a tremendous volley of rockets into Israel—the largest display of indiscriminate force since 2014. Israel’s advanced anti-missile defense system, the “Iron Dome,” put on a science-fictional display as it intercepted rocket after rocket over Israeli cities. But the barrage overwhelmed the nation’s defenses, taking the lives of Israelis who emerged from their shelters. In response to these attacks, Israel targeted Hamas military sites in Gaza, many of which are located in densely populated areas of the Strip or even inside occupied buildings. In one instance, Israel leveled a residential building in Gaza City, but only after a series of telephone warnings and “roof-knocking” ordnance alerted its occupants. Nevertheless, Hamas reports that this conflict is producing Palestinian civilian casualties. That’s tragic, though we cannot be sure how many are attributable to Israeli action since a significant percentage of Hamas’s unguided rockets land inside Gaza’s borders. These are the facts of this case, and they do not matter one whit to the congressional progressives for whom Israel can do no right.

Jonah Goldberg distills the overall moral calculus down to one accurate and simple statement of truth:

This truth may offend or enrage, but it's still the truth. Hamas is a genocidal organization whose ability to murder Israeli civilians is limited not by bloodthirsty ambition, but by its own incompetence and Israel's superior defenses. Israel bends over backward to limit civilian casualties during these conflicts, which it does not initiate. This is a challenge because Hamas is infamous for deliberately launching its terror strikes from neighborhoods, schools, and hospitals. They cynically cause and relish Palestinian civilian casualties as a public relations cudgel with which to pummel the Israelis. It's sick. And much of the vaunted "international community" and media go right along with the propaganda; also sick. Let's be clear: Those who side with, or make excuses for, the "tries-very-hard-to-murder-innocent-people" element in this conflict are disgracing themselves and have no right to claim any mantle of "justice" or "humanitarianism."

Increasing numbers of American leftists fall into this category, abandoning their alleged opposition to bigotry, misogyny and homophobia to offer aid and comfort to a terror group that is horrifically illiberal and regressive in its values. Why? Some are just outright antisemites. For others, it seems as though the toxicity of identity obsession and radical ideology compels them to sympathize with whichever "side" can be cast as the "oppressed," the "colonized" or the disadvantaged. Facts, morality, and other factors are tertiary at best. Some seem almost perversely disappointed that Israel's Iron Dome technology is so effective at exploding incoming rockets before they can strike Israeli civilians. Think of the inequity. There's also a weird racial component at play, underscored by chanting about "black and brown bodies" – a slogan that in this case ignores the many "black and brown bodies" inside Israel, erases the "black and brown bodies" killed or endangered by Hamas' own instruments of terror, and falsely transposes an already-harmful American racial narrative onto this conflict:

In general, I am loathe to deny Americans the right to play their national sports, which these days apparently include mau-mauing “white people”—though I will say that it seems creepy to use skin color as the primary way to identify human beings, like 19th century “race scientists” did. But since Congressman Bowman is being joined by a host of other elected officials including Rashida Tlaib in trying to chauvinistically transpose their own American psychodrama onto a foreign region, this is now starting to get terrifyingly dangerous—and I don't mean for Israel, but for Jews living here in the United States, including those in Congressman Bowman’s own district. So let’s be clear as day: Israel isn’t America, Jews aren’t white, and Palestinians aren’t “Black and brown people.” Judaism is an identity that predates “race,” just as it predates America, and the sin of slavery, and the idea of nations and the Christian and Muslim faiths...The world’s sole Jewish state was not formed to give Jews yet another ghetto in which to cower in fear. The country’s restraint in the face of these deadly provocations is not some kind of acknowledgement of guilt or slick PR move, the way woke corporations write checks to Black Lives Matter. In a dangerous part of the world, real bad boys move in silence, with violence—and believe me, no one will care how loudly progressives in America may howl. We know that America can bring peace, or it can bring war by encouraging our enemies and rewarding them when they try to kill us. In which case, the bloodshed that follows is on your head.

Read this full, righteous column, and remember the names of the useful idiots, the preening know-nothings, and the lying bigots who are propagating this dangerous bile. I'll leave you with this:

Hamas terror leader says the quiet part out loud: Iran supplies it with money and weapons it uses to attack Israel. And Biden appeasement team is in Vienna giving Iran billions of dollars and a path to a nuclear weapon. This is dangerous.
pic.twitter.com/aLRh1rTmYR