Three Reasons Why It's No Surprise Hamas Violated the Latest Ceasefire 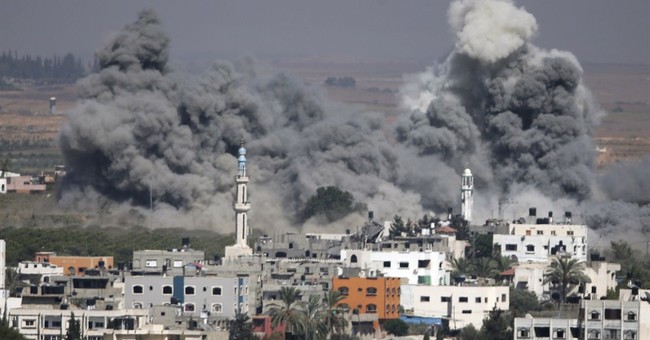 (1) By my unofficial count, this is the seventh ceasefire or truce that Hamas has rejected, violated, or broken since the current conflict began last month. The genesis of this war, by the way, was the kidnap and murder of three Israeli teenagers, perpetrated by a Hamas-funded terrorist cell in the West Bank. When Israeli entered the West Bank in search of the perpetrators (local Palestinians pelted the ambulance carrying the boys' bodies with rocks), Hamas stepped up its rocketing campaign targeting Israeli civilians. That bombardment has been going on for years, ticking up ever since Israel unilaterally pulled out of Gaza in 2005. Israel responded with force, culminating in the land incursion aimed at destroying Hamas' network of terror tunnels -- the purpose of which was to bypass Israel's weapons blockade, and to allow militants to slip into Israel to carry out attacks. The tunnels were built over a period of years, using supplies earmarked for projects such as schools and infrastructure construction. Child labor was reportedly exploited to built the passageways, reportedly resulting in approximately 160 deaths during the treacherous process.

(2) Hamas explicitly warned that it was preparing to resume its rocketing as soon as the latest 72-hour ceasefire expired. In fact, it looks like a miscue may have accidentally blown up a few of their own men in preparation for the resumption of hostilities. They ended up not just breaking the pause, but outright violating the temporary truce. Again. Perhaps they don't have functioning clocks, or perhaps they had itchy trigger fingers, or perhaps Hamas doesn't have control over the hive of violent radicals that pervade the Gaza strip. Israel, the Palestinian Authority and the Egyptian government were all in favor of an unconditional extension of the truce. Hamas said no. Israel is now fighting back. By the way, a New York Times analysis of recent casualties in Gaza determines that the most disproportionately represented demographic group among the dead are…young men in their 20's -- a.k.a. the people most likely to fit the militant profile. Women and children under the age of 15, meanwhile, "were the most underrepresented." Why, it's almost as if Israel has been going to extraordinary lengths to narrowly target terrorists and avoid civilian collateral damage -- even as Hamas uses the latter group as human shields, firing salvos from crowded neighborhoods, storing rockets inside UN schools, and using a crowded hospital as a command center.


(3) The most depressing and most elementary reality is this: The Hamas radicals don't want peace. Their demands are slippery and ever-shifting; most recently, they're insisting that Israel lift its blockade in such a way that would allow Hamas to re-arm, unfettered, so they could gear up for the next war. (Israel already allows food, medicine, fuel, and legitimate commercial goods to pass through. Israel also provides much of the strip's electricity). The spokesman that Hamas has selected to represent them in Western media has been unable to answer questions about his own insane blood libel against Jews, nor has he backed away from they group's charter, which openly calls for genocide. If Hamas would simply acknowledge Israel's right to exist as a Jewish state and renounce violence, they would have peace. But they don't. People who reflexively blame Israel for the other side's genocidal hatred are flat-out siding with terrorism and barbarity over pluralism, peace and democracy.