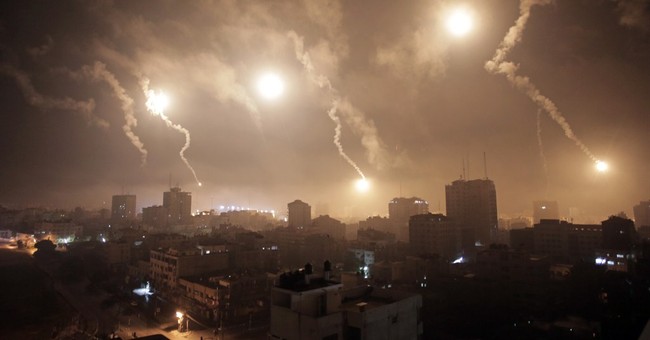 First of all, major credit is owed to this TV crew from India's NDTV for having the courage and journalistic ethics to report the truth about Hamas' activities within Gaza. One of the filthiest open secrets of the current conflict is how the Islamist terrorist organization bullies the international media into self-censorship, imposing an effective blackout on "unhelpful" details and images. The occasional reporter will note the Hamas leadership's cynical exploitation of a major hospital as an operations center, but that fact isn't widely disseminated. A handful of truth-tellers have blown the whistle on Hamas' campaign of intimidation, but they're the exception to the rule. Think about it: Over the last three-plus weeks, how many photos and videos have you personally seen of sobbing mothers, maimed children, and plumes of black smoke rising over devastated edifices? And how many have you seen of Hamas terrorists carrying automatic weapons, chanting murderous slogans, or firing off rockets by the thousands? The pictures beamed across the world are overwhelmingly slanted in favor of Hamas' preferred propaganda, and there's a reason for that glaring imbalance: Journalists do not have free access within Gaza. As a result, implicitly or explicitly, the Israelis are portrayed as the powerful military force wreaking indiscriminate death and destruction on helpless, defenseless Palestinians civilians. Yes, there are mentions of rockets being fired into Israel, but that element of the battle (which is responsible for touching off this terrible bout of hostilities) is almost treated as if it's a naturally-occurring phenomenon, with intense scrutiny paid to Israeli missteps. Precious little attention is focused on who Hamas is, the civilian-endangering tactics they employ, or the insane, genocidal ideology to which they subscribe. Which brings us to NDTV's exceedingly rare -- and certainly unauthorized -- footage of how Hamas' rocket teams operate:


Israel has argued that that [Hamas'] rockets are fired from civilian areas, and this is why its retaliatory strikes can result in civilian casualties...this morning, NDTV witnessed one such rocket silo being created under a tent right next to the hotel where our team was staying. Minutes later, we saw the rocket being fired, just before the 72-hour ceasefire came into effect. It began with a mysterious tent with a blue canopy that bobbed up yesterday (August 4) at 6:30 am in an open patch of land next to our window. We saw three men making a multitude of journeys in and out of the tent, sometimes with wires. An hour later, they emerged, dismantled the tent, changed their clothes and walked away. The next morning - today - we woke to news of the 72-hour ceasefire but just before it was to take effect, the rocket next to our hotel was fired. There was a loud explosion and a whooshing sound. The cloud of smoke that rose was captured by our cameraperson. This report is being aired on NDTV and published on ndtv.com after our team left the Gaza strip - Hamas has not taken very kindly to any reporting of its rockets being fired. But just as we reported the devastating consequences of Israel's offensive on Gaza's civilians, it is equally important to report on how Hamas places those very civilians at risk by firing rockets deep from the heart of civilian zones.


In the video, the correspondent notes that his footage "establishes something which Hamas has always been accused of -- that they actually use densely populated civilian areas to fire their rockets." Israel has leveled those accusations (with video proof) repeatedly because they're true. "If Hamas does fire a rocket from here," the Indian journalist continues, "it will have immediate consequences for everyone around here. I also must report at this point that the first night that we came here, we did...hear a rocket go off exactly from that plot of land. And the hotels opposite us were evacuated because the Israeli sent a warning that there might be a strike." That last bit confirms another detail that Israel has asserted all along: That they jump through hoops to protect civilians, using an array of methods to warn people to disperse from areas facing airstrikes. In fact, buried at the very bottom of today's Washington Post story detailing the IDF's withdrawal from Gaza ahead of the new 72-hour ceasefire, the uncle of a young girl slain in an Israeli salvo laments the fact that the IDF allegedly didn't warn them of the attack:

The house was in a neighborhood of Gaza where people live close together. Residents said they did not receive a phone call from the Israeli military warning them to evacuate, a procedure Israel has often used during the conflict. “We were very surprised,” said Bakri, the uncle. “They didn’t warn us. They didn’t call us. Everyone was outside to shop during the cease-fire. It was a miracle more didn’t die.”


This allegation once again affirms the fact that Israel's standard operating procedure is to issue humanitarian warnings prior to attacking a target, an extraordinary step for any military to take in the middle of a hot war. I'm sure this grieving relative didn't intend to lend credence to so-called "Zionist propaganda," but he did. Just as a pro-Palestinian journalist inadvertently confirmed that Hamas was shooting rockets from the grounds of a hospital a few nights ago. Sometimes the facts just accidentally slip out. Now, if the IDF failed to follow protocol in this instance, and if it led to civilian deaths, the incident should be investigated and people held accountable, if appropriate. People do -- and should -- hold Israel to a higher standard than the terrorist fanatics on the other side of the fight. Then again, I qualified both accusations with "ifs" because the people who spoon-feed death tolls and details to the Western media happen to be the same people whose statements of purpose openly endorse the annihilation of Jews, and who repeat ancient blood libel lunacy on Arab-language television, then turn around and claim to have "no problem" with Jews on CNN. Pardon me for not implicitly endorsing the credibility of the information they provide. Incidentally, Hamas fired off a barrage of rockets just before the agreed-upon truce as to begin today. One of them landed...in the West Bank, on the home of a Palestinian family.


UPDATE - Two big ones. Israeli officials say the man taken into custody for the kidnapping and murder of three Israeli teens (a brutal act that contributed to the onset of this war) has admitted that he was operating under orders of, and with funding from, Hamas in Gaza. Also, a French reporter exposed another Hamas rocket launch site nestled in a civilian neighborhood, nearby a hotel, and "right next to" a United Nations facility. Even more confirmation of what Israel has been saying all along: