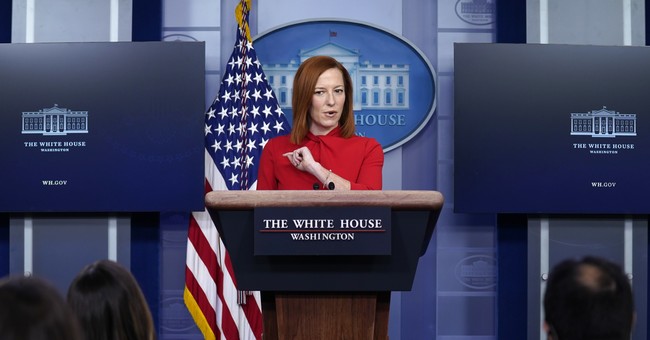 White House Press Secretary Jen Psaki awkwardly dodged a question on ABC News last weekend about whether President Biden still believes New York Gov. Andrew Cuomo represents the "gold standard" on COVID leadership -- an infamous accolade Biden had offered on national television.  Fox News' Peter Doocy followed up on that line of inquiry, prompting Psaki to back away from her boss' previous expressions of fulsome praise for Cuomo.  In doing so, she admonished Doocy and others to be mindful of the "context" of Biden's comments, which she seems to think help vindicate the president's judgment. April 2020 was early days, after all:

Jen Psaki: "Well first of all, I think to be fair, let's put all of the comments in context." pic.twitter.com/JBmssX38Hv

If it was a one-off tribute from Biden, that would be one thing.  But Psaki is evidently hoping that everyone forgets the Democratic National Convention, at which Biden offered Cuomo a plum primetime speaking slot on the issue of Coronavirus response, which constituted a strong pre-release hype opportunity for Cuomo's insulting, self-congratulatory book on the subject.   Cuomo was showcased as a leading authority at Biden's nominating convention, days after the Associated Press published a bombshell investigative story exposing the Cuomo administration's cover-up of accurate nursing home death data in New York.  The Daily Caller had highlighted that same burgeoning scandal weeks earlier.  Here was Biden's reaction:

.@AndrewCuomo, thank you for your leadership and the example you’ve set for all Americans during this pandemic. #DemConvention pic.twitter.com/Ir11a1vJQs

An "example" for the nation, he said.  Again, this was tweeted after the nursing home deaths cover-up had been flagged in the media, but before the rest of the press decided it was finally time to pay attention and kick the scandal into high gear.  How does Psaki explain that "context"?  Meanwhile, Cuomo is fending off specific sexual harassment and 'Me Too' allegations, which the White House didn't seem eager to discuss either.  But hey, at least Cuomo is crushing it on vaccinations, right?

If New York City were a state, it would be the least vaccinated in the country, with 9.5% of the population receiving at least one shot. Washington, D.C., and Puerto Rico are also getting a higher share of people vaccinated. https://t.co/RADbG6TlgX