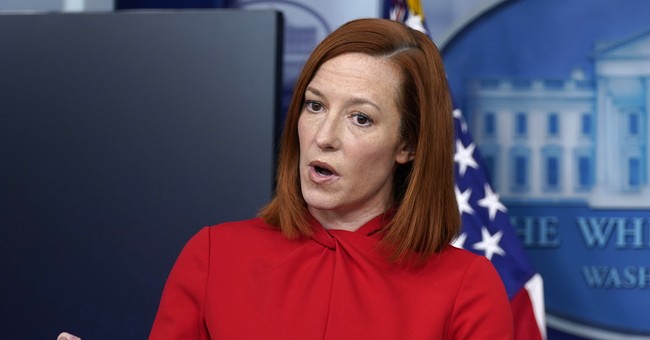 White House Press Secretary Jen Psaki on Sunday failed to answer whether or not President Joe Biden still sees New York Gov. Andrew Cuomo (D) as the "gold standard" of COVID leadership. It was a praise Biden gave Cuomo last spring at the start of the pandemic. Since then, we have learned that Cuomo allegedly cooked the books and underreported nursing home deaths in the state by as much as 50 percent. Cuomo and his team were concerned about the numbers being used against him for political gain.

"Last spring, President Biden cited Andrew Cuomo as the 'gold standard' for leadership during the pandemic," ABC News host Jon Karl said before playing the clip. "So now we've seen that Gov. Cuomo has allegedly undercounted nursing home deaths, misled legislators in New York, and he called New York Assemblyman Ron Kim raising questions, basically threatening to destroy him I think was his actual words, so does President Biden still consider Andrew Cuomo the 'gold standard' when it comes to leadership on the pandemic?"

Instead of flat out saying what Cuomo did was wrong, Psaki attempted to spin the discussion.

"Well, we work with Gov. Cuomo just like we work with governors across the country. He's also chair of the [National Governors Association]. He's played an important role in ensuring that we're coordinating closely and getting assistance out to people of his state and to states across the country," she replied. "And we'll continue to do that. And, of course, there will be a process. The investigations, we'll leave that to others to determine the proper law enforcement authorities to determine and how that path is going to move as we look forward."

"But we're going to continue to work with a range of governors, including, of course, Gov. Cuomo, because we think the people of New York, the states across the country, need assistance, not just to get through the pandemic, but to get through the difficult economic time." the press secretary said. "That's where our focus remains."

Karl pushed back, saying the press secretary failed to answer the question. When he attempted to ask whether or not Biden saw Cuomo as the "gold standard" in COVID leadership, Psaki replied by saying it's not a simple "yes" or "no" answer.

This really shouldn't have been that hard for Psaki to address. There are people on both sides of the political aisle that are disgusted with Cuomo's nursing home policy, which took COVID-positive patients from the hospital and transferred them to nursing homes to create bed space. The decision resulted in roughly 15,000 deaths.

It would be one thing if Cuomo created the policy, realized his decision resulted in thousands of people dying, and he took responsibility for it. But he hasn't. Instead, he did his best to lie and coverup what took place. He even went so far as to come up with various reasons for why the elderly died (none of which were, conveniently, his fault). He blamed the staff for bringing in the virus and even said they were wrong for their "presumed death" policies, which happens in a few states, including New York.

It's a completely different story when Cuomo made this disastrous policy, knew it was wrong and resulted in deaths, so he covered it up. Yes, people are upset with the initial policy decision, but they're more upset with the fact that he covered up his wrongdoing. The man New Yorkers – and even governors across the country – looked to for guidance put his political career ahead of Americans' lives.

Psaki and the White House should say there's something wrong with what happened. But they won't. Because they too are more concerned with the political fall out of slamming Cuomo than they are about getting accountability and justice for those innocent people who lost their lives. Being complacent makes the Biden administration just as guilty as the Cuomo administration.