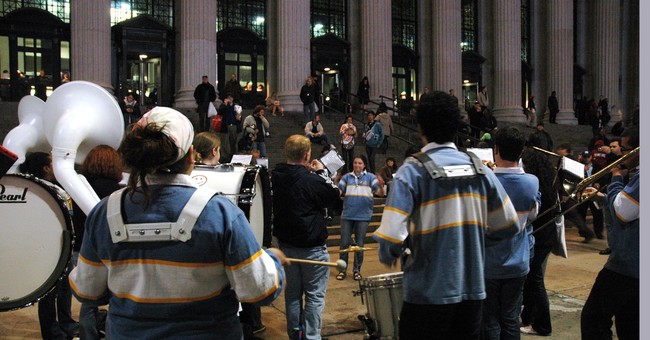 Why follow stories about the bonkers excesses of woke campus culture? Because as I've warned for years, the wild roster of current attractions in academia is coming soon to a community near you. When older people have rolled their eyes at ridiculousness on campuses in the past, they've scoffed to each other, just wait until these kids have to enter the real world. But these kids are entering and reshaping the real world. And the sort of hyper-woke, ultra-politicized nonsense that Mary Katharine Ham and I documented in "End of Discussion" more than five years ago is growing increasingly mainstream. A soulless, anti-intellectual, grace-free brand of leftism is spreading its tentacles throughout our society, and universities are leading indicators and tips of the proverbial spear. To wit, from Columbia University out of the Ivy League:

The marching band (!!) at @Columbia was apparently “founded on the basis of racism, cultural oppression, misogyny, and sexual harassment.” This left the band no choice but to disband “unanimously and enthusiastically.” pic.twitter.com/P5FFFx5PtP

"The Columbia University Marching Band will not continue to exist in any capacity and will no longer serve as a Columbia spirit group...The damage experienced at the hands of CUMB may be irreparable," they write about themselves, members of a marching band. The band decided to eradicate itself rather than attempt to apologize or make amends for its..." racist, oppressive, misogynistic" founding. They were beyond repair, beyond reform, beyond saving, according to them. This statement claims that the decision was unanimous and enthusiastic. I absolutely guarantee you that there were members of "CUMB" who joined because they genuinely love it and very much wanted to continue playing musical instruments at football games and performing at halftime. But the bullies often prevail in these settings, and no one wanted to be seen as the "bigotry" defender, or whatever. So, poof, a fun, long-standing institution is gone. Meanwhile, at my alma mater:

Northwestern’s Panhellenic Association, which governs 11 chapters, released a statement acknowledging its harmful history and current movement to abolish Greek life on campus. The statement was written in July and approved for release after a majority vote of PHA chapter delegates last week. “PHA has failed its purpose of serving as an inclusive space meant to empower all women and non-binary people, and has continuously reaffirmed the patriarchy, binary gender roles, and heteronormativity,” the statement read. The organization, PHA’s executive board wrote, has functioned as an oppressive institution that furthers exclusivity, classism, racism and homophobia in the community. The executive board added that all chapter houses sit on stolen land, and members reap the benefits of white supremacy and the prison-industrial complex. “It is our firm belief that the harm done by PHA, regardless of intent, is irreparable and no amount of apologies or reform can lead to restorative justice,” the executive board wrote. “We acknowledge that this has come at a time where societal pressure for abolition has spread across campuses. Our movement towards disbanding is long overdue.”

“When we say abolish Greek life, we have no intention of leaving a space that allows it to return,” the executive board wrote. “Therefore, we are looking into ways that would prevent national Greek chapters from coming to campus to ‘recolonize.’” In order to avoid these organizations going “underground,” PHA urged NU in the statement to take action to protect its students by preventing such groups from forming and abolish current organizations that “systematically perpetuate harm.” The executive board highlighted the need for the University to prioritize black students’ demands, because of the administration’s “consistent enablement of systems of oppressions on campus.” PHA’s statement pointed to the 52 years since the Bursar’s Office takeover, three months since NU Community Not Cops’ petition and how the University has yet to fulfill the demands of black students. “Any organization that charges students for membership is classist and therefore, perpetuates systems of injustice and inequity,” PHA’s executive board wrote.

These people all personally chose to join the Greek system. They're now deciding that it's so irreparably terrible that resignation or de-affiliation isn't sufficient. Indeed, even pushing for the system to disband isn't enough. The entire Greek system, and its many decades of tradition (cc: deep-pocketed alumni/donors), must be fully uprooted and the earth salted in order to prevent "recolonization." No space for potential return shall be tolerated. Indeed, all student organizations deemed to "systematically perpetuate harm" must also be abolished, in order to preclude any "underground" fun from reconstituting. This is downright deranged and fanatical. It certainly does not speak for all members of the Greek system at NU, but one wonders how many dissenters, even if they're in the majority, will have the temerity to object. Also, if the authors of this radical letter are against charging for membership and exclusivity, do they need someone to remind them that they applied to a top ten university? Would they like to admit all applicants and make it all "free"? What would that do to the value of their degrees? Finally, we turn to Arizona State:

The first sign of cancel culture bubbling up at Arizona State University’s Walter Cronkite School of Journalism and Mass Communication involved Sonya Duhé, whom the university named dean this spring. Her tenure was cut short almost instantly after she published a tweet praying for “the good police officers who keep us safe.” The protest-allied campus revolted against the incoming dean’s “racist” tweet and provoked a former student to accuse Duhé of committing “four years of microaggressions” against her. Other students would come forward to allege that she had made similar “microaggressive comments” to them. It wasn’t one week before the Cronkite School revoked its offer and pledged to be more “inclusive” moving forward...when the news division of Arizona PBS, published a poll following a May looting spree in Scottsdale, progressive students complained that the poll’s language was too friendly toward police officers — so Cronkite News folded to the pressure. It deleted the poll and apologized for causing “divisiveness”: “It was not our intention to downplay the actions of law enforcement.”

When a second young journalist published a Q&A with a former police officer in June, students complained that this exchange also was too friendly. Once again, Cronkite News folded to the pressure. It wiped the Q&A offline and replaced it with an apologetic note pledging to “better serve and represent our communities, especially the black community and other communities of color.”...The most recent “cancel” target is Rae’Lee Klein, a young journalist at the Cronkite School’s Blaze Radio. After the police-involved shooting of Jacob Blake in Kenosha, Wis., Klein, on her personal Twitter account, linked to a New York Post investigation and wrote: “Please read this article to get the background of Jacob Blake’s warrant. You’ll be quite disgusted.” Progressive students were apoplectic. The board voted to remove her as station manager, threatened to resign if she did not, and released a statement from “Blaze Radio alumni” condemning her for trying to “dehumanize and insinuate blame on the victims of police violence.”

I guess credible sexual assault allegations from a woman of color doesn't matter to some folks when there are higher Woke Virtues to signal. Fortunately, Klein isn't backing down. Someone needs to stand up to these sorts of people. Many of the "adults" seem incapable of doing so.