Analysis: Despite Being the Presumptive Nominee, Biden Keeps Sliding Left 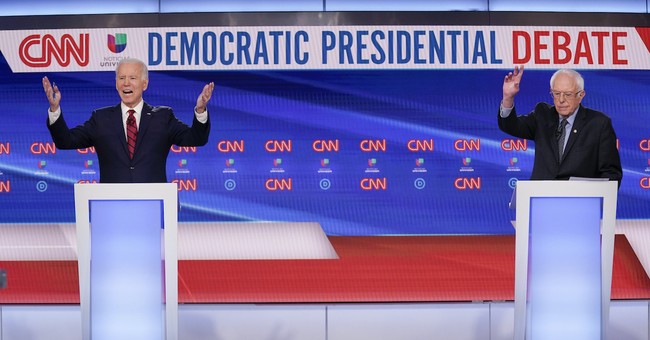 Overall, Sunday's Democratic debate on CNN further solidified Joe Biden's strong position moving forward, as did last night's primary sweep. He's the prohibitive leader in delegates and popular votes, and he avoided a meltdown that could have thrown up barriers to his march toward Milwaukee -- despite his and Bernie's collective, cringeworthy mental block on the name of the current global pandemic. Also, like others, I enjoyed this debate's audience-free and more freewheeling format, allowing the two candidates to engage at some length without whooping supporters or officious moderators enforcing strict time limits. Bernie Sanders (who is rumored to be dropping out) cornered Biden on occasion, challenging him on certain details of his record in the Senate, but didn't land any lasting blows. In fact, when Sanders appeared to be on the brink of really drawing political blood, he backed off a bit. This exchange comes to mind:

Biden: "You get rid of the 9 super PACs you have?"

Bernie: "I don't have any super PACs"

Biden: "Come'on, give me a break" pic.twitter.com/mi1YMxYPLx

I suspect Biden couldn't have listed a single one of the organizations to which he was referring, and Bernie could have embarrassed him by forcing the issue. The former vice president charged down this path, offered to do something he couldn't do -- and after that became apparent, Sanders more or less let him off the hook. Biden also boasted about being the first top US administration official to publicly vocalize support for same-sex marriage, ignoring that his immediate Republican predecessor, Dick Cheney, had done so roughly eight years prior. Details and facts never get in the way of a shouted Joe Biden story. Generally, while each man had their moments, it was more of the same from Bernie, and more leftward pandering from the frontrunner.

Over and over again, I was surprised that Biden took Sanders' bait and waded into the weeds on Senate-era minutiae, rather than pivoting to attacking President Trump. And rather than edging toward the political center, Biden has conspicuously decided to bolt further to the left on a host of issues -- from embracing Elizabeth Warren's bankruptcy proposal to partially adopting Bernie's 'free' college plan. He also doubled down on newfound abortion radicalism and dove headlong into crude identity politics bean-counting, pledging to nominate a Supreme Court justice of a specific sex and skin color and to pick a female running mate. And beyond evincing hostility toward domestic energy production (including a vow that oil drilling would be banned, and some dissembling about fracking), Biden also issued this insane pronouncement about drastically reducing immigration enforcement:

.@JoeBiden: “The first 100 days of my administration, no one will be deported at all." pic.twitter.com/MgU2ZQZmAW

Zero deportations whatsoever for 100 days? Why? What about convicted violent felons who were scheduled for deportation? The logistics and policy implications don't match-up with Biden's shallow preening. But even if you can get past the three-month moratorium, Biden says the only deportations that will occur under his presidency will be triggered by the subsequent commission of a felony. In other words, if you violate our laws by illegally entering the country, you will not be removed by the federal government unless you're involved in additional serious crimes. This is flat-out encouraging illegal immigration, period. It's reckless, it makes a mockery of our immigration laws and it would prompt another crisis at the border. Even for moderates on this issue (for instance, I support a path to legal status for many illegal immigrants living inside the US, as well as a DREAM Act), Biden's idea is, frankly, crazy. It's a blanket de facto amnesty. What is he doing?

His calculation is that moderates will vote against Trump no matter what & he needs the Bernie/Warren wing to turn out https://t.co/v3hyLdCKTB

"Or: unify party now, appeal to swing voters later when they are paying attention," responds Ramesh Ponnuru, who thinks Biden is angling to get the center-left operating as one big happy family before he moderates for the general electorate. That's certainly part of the strategy, I think, but this stuff is all on tape. And Biden's ability to coherently explain major shifts in his own worldview is, shall we say, strained and diminished. I'll leave you with the Trump campaign needling the media by ostentatiously "pouncing:"