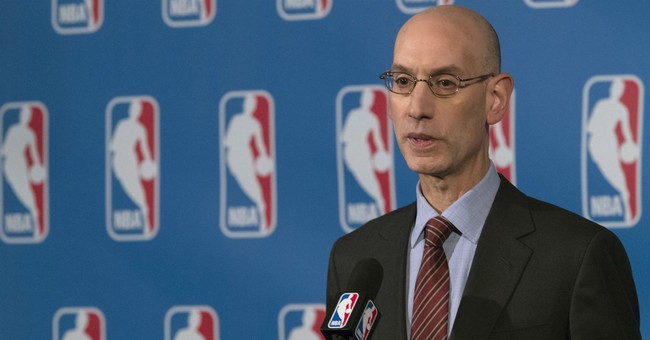 It keeps getting worse.  In case you missed it yesterday, a CNN journalist asked two Houston Rockets super stars about free expression while in China, and her question was promptly shot down by a media relations official with the team, as what appeared to be a Chinese minder grabbed for the microphone.  She was instructed to ask "basketball questions" only.  Her query was ignored.  This isn't the most pathetic video footage to come out of this ongoing controversy, but it's up there:

It seemed like a potentially-heartening sign that the league reportedly apologized to the journalist, but I'm somehow getting the sense that they don't really mean it:

The NBA has canceled all media access for the remainder of its visit to China as it puts players in a "complicated" and "unfair" situation, it said. The league is embroiled in a standoff with China after the Houston Rockets' general manager Daryl Morey tweeted his support for the pro-democracy movement in Hong Kong. The announcement comes a day after CNN's Christina Macfarlane was shut down by a Houston Rockets' media officer as she tried to ask James Harden and Russell Westbrook a question about the NBA's position with China during a news conference in Tokyo. "They [the teams] have been placed into a complicated and unprecedented situation while abroad and we believe it would be unfair to ask them to address these matters in real time," said a NBA statement Friday.

Amid embarrassing equivocations and pretend ignorance from the NBA's most notoriously outspoken social justice warriors, it appears one of them has landed on a rhetorical, place-holding solution to the problem that the league has now eliminated by cutting off media access. Actually, America is bad, too:

Steve Kerr on if he's ever been asked about human rights during his previous trips to China:

"No. Nor has (America's) record of human rights abuses come up either... People in China didn't ask me about, you know, people owning AR-15s and mowing each other down in a mall." pic.twitter.com/56mNC7LmID

'Some Americans abuse their constitutional rights in egregious ways, so maybe we're not in a place to criticize a foreign authoritarian regime's systemic denial of rights to its citizens,' Kerr effectively argues, employing anti-America whataboutism to deflect questions about the totalitarian government that is actively interning a million or so Muslims and forcibly harvesting organs from religious minorities.  The moral relativism is revolting and moronic.  This man is a disgraceful fraud and should never be taken seriously again, away from the court.  I'm not a "shut up and dribble" sort of person, but my goodness.  Meanwhile, as the NBA engages in boot-licking and censorship on the Communist Chinese government's behalf, one league franchise has announced its decision to boycott...Israel:

It takes a special kind of moral idiocy to aid and abet an actual apartheid state, while targeting the world's lone, tiny Jewish state, whose obsessive critics falsely cry 'apartheid.'  But such moral idiocy is profoundly on-brand for the NBA.  Plus, consider the relative market shares of China and Israel.  That's the most important factor.  I'll leave you with this, which barely feels like parody at this point: