Economists: Actually, the Media's Giddy Chatter About a Looming Recession is Overblown 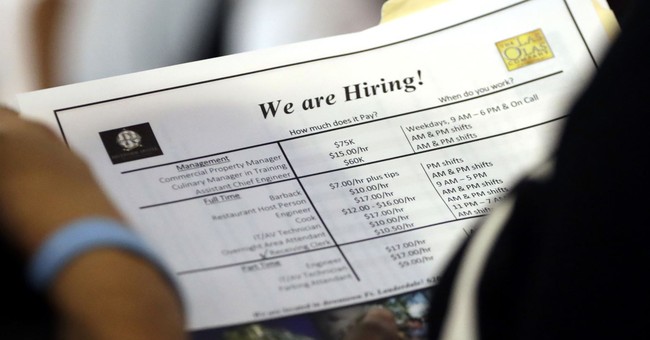 A few caveats to start, regarding causes for concern.  First, trade uncertainty is undoubtedly contributing to market jitters, with companies and job creators looking anxiously at the possibility of a related slowdown.  President Trump is largely responsible for this, perhaps jeopardizing the economic progress advanced by some of his successful policies, such as tax reform and deregulation.  Then again, there's a bipartisan consensus on getting tougher with China, and the Democrat-held House could do its part to inject more certainty on the trade front by allowing a vote on the Trump-approved USMCA, sometimes known as New NAFTA.  Second, there are some signs of a global slowdown, which could drag down the US, even if our economy is relatively strong.  Third, this reliable recession indicator did set off alarm bells last week, understandably so; but it has stabilized since, with markets breathing a sigh of relief.  So let's keep the more optimistic news rolling:

Key business activity indexes for New York and Philadelphia pointed to continued expansion in August amid worries that the U.S.-China trade war was dampening growth prospects, according to two reports released Thursday. The Empire State Manufacturing Survey had been expected to show a reading of 0.5 while the Philadelphia Fed Business Outlook Survey was projected at 8, according to economists surveyed by Dow Jones. Both readings were well above those expectations, with the New York gauge posting a 4.8 reading and Philadelphia 16.8. To be sure, both were declines from July readings, but they were solidly in growth territory. The indexes measure businesses reporting expansion against those contracting.

Also via CNBC, there's this story, which significantly downplays the likelihood of a coming recession, highlighting robust US consumer spending:

“Underlying factors across major economies indicate that recession fears may be overblown, economists have suggested...” https://t.co/GCpB866381

The U.S. and global economy should avoid a recession in 2020, with a combination of strong retail sales, potential monetary policy easing and service sector robustness expected to mitigate slowing growth, according to several leading economists...However, underlying factors across major economies indicate that recession fears may be overblown, economists have suggested...Strong retail sales figures for July suggested that U.S. consumers are continuing to prop up the economy, partially offsetting the drag on business confidence from the U.S.-China trade conflict. Sales climbed 0.7% month-on-month in July, a fifth successive increase, reiterating the American consumer’s role in providing lifeblood to the economy. A note from UBS Global CIO Mark Haefele on Monday said this reinforces belief that the U.S. economy should avoid a recession. Assuming no trade war escalation, UBS has assigned just a 25% chance that the U.S. economy will contract for two consecutive quarters in 2020.

Retail sales also cranked up in July.  Finally, second quarter US productivity came in at a "healthy" clip:

U.S. productivity increased at a decent pace in the second quarter, a trend that could lead to higher wages if it continues. The Labor Department said Thursday that productivity — or output per hour worked — rose 2.3% in the April-June quarter, down from 3.5% in the first three months of the year. The first quarter gain was the best in four years. Greater productivity is a key ingredient in raising living standards. It enables companies to lift worker pay without raising prices on costumers. The recovery, now in its 11th year, has been held back by historically weak productivity growth. It has grown at roughly two-thirds of its historical average since the recession began. Yet productivity has picked up in recent quarters and expanded 1.8% in the past year. That’s below the 2.1% long-term annual average, but better than the 1.3% average increase since the recession began in 2007.

Add in consistently and historically low unemployment, plus steady wage gains (not caused by this), and several key economic fundamentals appear to be holding up rather well.  This may come as sad news for certain leftists openly rooting for a painful and damaging (but Trump-harming!) recession, and perhaps taking the air out of a story that many in the media have been hyping.  In other words, some caution is warranted, but everyone should take a breath.  I'll leave you with this:

Charles Payne laid out the evidence quite well here:

Sean Spicer Speaks Out on Jen Psaki's Going After His Military Record: 'The Gloves Are Off'
Townhall
'Russiagate in a nutshell': Glenn Greenwald sums up the latest on John Durham's investigation, pulls Hillary Clinton's old tweet about Trump's 'covert server'
Twitchy
Durham Indictment Is in and It's Big After All
Redstate
Lock 'Em Up: Same FBI That Chased Russia Collusion Hoax for Years Covered Up Sexual Abuse of USA Gymnasts
PJ Media