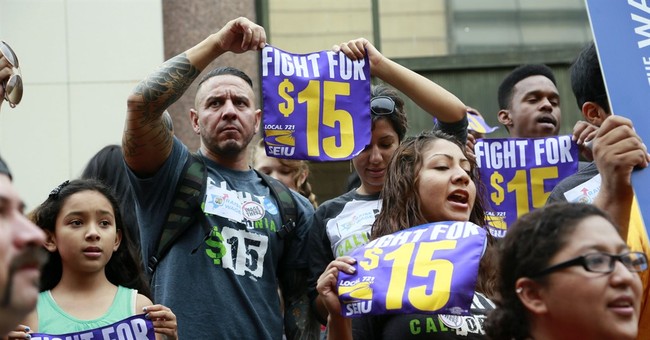 We've written previously about the settled science on minimum wage increases -- a form of government price control that often seems superficially appealing, but frequently ends up hurting the very people it's supposedly intended to help.  Two years ago, we highlighted the harm inflicted by Seattle's minimum wage hike, which resulted in lower earnings, slashed hours, and fewer jobs:

A University of Washington team studying the law's effects found that the law has boosted pay in low-wage jobs since it took effect in 2015, but that it also caused a 9 percent reduction in hours worked, The Seattle Times reported. For an average low-wage Seattle worker, that's a loss of about $125 per month, the study said. "If you're a low-skilled worker with one of those jobs, $125 a month is a sizable amount of money," said Mark Long, one of the authors. "It can be the difference between being able to pay your rent and not being able to pay your rent." There would be about 5,000 more low-wage jobs in the city without the law, the study estimated...

In 2018, Washington, DC was forced to repeal a minimum wage increase that was set to hammer restaurant workers. The District's liberal voters approved a plan that was intended to boost the income of bartenders and wait staff -- but after basic economics intervened, the city council was pressured to backtrack and erase the disastrous "progress:"

When D.C. voters approved Initiative 77 in June, they thought they were giving the city's bartenders and restaurant workers a boost in the bank account. But many of those workers didn't want the law, which they didn't think would work as advertised. Today the city council answered those employees' appeals and voted 8–5 to consign Initiative 77 to the trash pile of bad policy. Though it was served up as a progressive plan to hike wages, Initiative 77 would have actually cost many workers money. The proposal abolished the so-called "tipped minimum wage" of $3.50 cents per hour, replacing it with a $15 minimum wage for all food service workers in the city. But workers that I (and other reporters) talked to before the vote told me that they often make far more than $15 a hour, thanks to tips...Given the choice, many workers said they'd rather not earn $15 per hour at the cost of losing their tips. More than 8,000 of them sent comments to the city council urging them to repeal the measure. Mayor Muriel E. Bowser, a Democrat, has indicated she would sign the repeal.

Flash forward to April of 2019, and a new, wide-ranging survey of the restaurant industry further confirms what we already know: Government-mandated wage increases cause employers to adjust, passing down costs to consumers, and hampering employees' opportunities to make money. Top-down mandates do not necessarily lead to intended effects, and quite often do exactly the opposite:

Harri, a workplace management software company that works with restaurants, surveyed 173 restaurants between Feb. 28 and March 15 about the impact of raising the minimum wage. The respondents represent more than 4,000 restaurant locations ranging from fine dining to fast food...the federal minimum wage has remained stagnant since 2009. House Democrats have been pushing a bill to raise the federal minimum wage to $15 per hour from $7.25...The restaurant industry employs a large portion of minimum wage workers. It’s no surprise that 83% of survey respondents affected by minimum wage hikes reported that their labor costs rose at least 3%. Twenty-three percent responded to minimum wage hikes by not making any changes to their business. But the majority did. The most popular response — from 71% of operators — was to raise menu prices. Nearly half reworked their food and beverage options to reduce costs. Some operators responded to the minimum wage increases by cutting costs, with 64% saying they reduced employee hours, and 43 percent saying they eliminated jobs.

House Democrats have introduced a $15 federal minimum wage bill, and multiple 2020 presidential candidates pledged to push for the same policy, if elected. This makes for an easy applause line among Democratic audiences, but shouldn't lawmakers be aggressively challenged on the actual, proven, real-world consequences of such measures?  When politicians endorse the "fight for 15," they are endorsing higher prices for customers, fewer hours and less take-home pay for workers, more automation, and diminished opportunities for entry-level employees.  How is that pro-worker?  And at what point can the deleterious economic outcomes of a policy no longer be accurately described as "unintended"?