Federal Accountants: Medicare Insolvent By 2026. Democrats: Let's Expand It and Make it Mandatory For All. 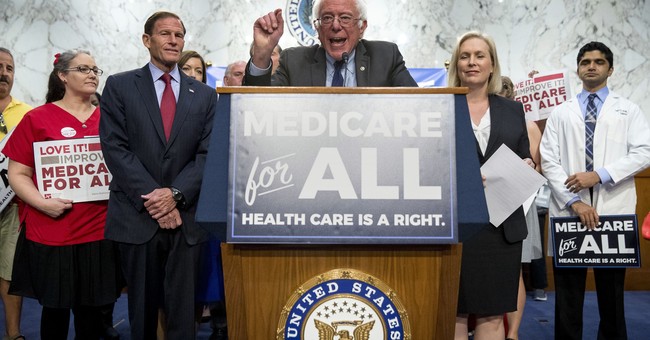 It's once again time to update the grim math demonstrating that two of the US government's biggest programs -- Medicare and Social Security, which combined to account for nearly 40 percent of all federal spending in 2017 -- are going insolvent.  Republicans occasionally claim to be serious about saving these programs through needed reforms, but have abandoned their erstwhile task under President Trump's anti-leadership.  Democrats have ling been outright denialists, demagoguing and lying about any GOP attempts to shore up the programs, and ludicrously arguing that both should be significantly expanded.  Here's the unvarnished truth, via the government's own bookkeepers:

The latest report from the government's overseers of Medicare and Social Security show the financial condition of the bedrock retirement programs for middle- and working-class Americans remains shaky. Monday's report paints a sobering picture of the programs, though it's relatively unchanged from last year's update. Social Security would become insolvent in 2035, one year later than previously estimated, with only enough money cover 80 percent of its obligations. Medicare is pointed toward insolvency even sooner, by 2026. But potential cuts such as curbing inflationary increases for Social Security, hiking payroll taxes, or raising the Medicare retirement age from the current 65 are so politically freighted and toxic that Washington's power players are mostly ignoring the problem. If Congress doesn't act, both programs would eventually be unable to cover the full cost of promised benefits. With Social Security that could mean automatic benefit cuts for most retirees, many of whom depend on the program to cover basic living costs. For Medicare, it could mean that hospitals, nursing homes, and other medical providers would be paid only part of their agreed-upon fees.

"Washington's power players" want to avoid this issue, but it's barreling down on all of us.  Medicare's 2026 insolvency date aligns with the the first midterm election of the next president, if Trump wins a second term.  We aren't talking about decades from now; we're talking about less than a decade from now.  And the consequences will be very real for beneficiaries and providers, both of whom would face painful cuts.  Not fake DC "cuts," but genuine benefit cuts.  Even with a robust economy, the solvency of these massive programs is dwindling away; the costs of Social Security are now projected to exceed the receipts it takes in by...next year, which is actually a very slight improvement, even though the overall trajectory remains relentlessly bleak:

Social Security’s costs are expected to exceed its income in 2020 for the first time since 1982, forcing the program to dip into its nearly $3 trillion trust fund to cover benefits. The improved forecast stems in part from the health of the labor market, which has boosted workers’ paychecks and fueled higher tax revenue. But the programs’ unsustainable long-term outlook is little changed from last year. By 2035, the trust funds for both programs will be depleted, and Social Security will no longer be able to pay its full scheduled benefits...

The government is making enormous promises to current and future retirees -- to the tune of tens of trillions of dollars -- that it has no means of keeping. As they currently exist, both Medicare and Social Security will cease to exist unless fiscal reality is recognized, and leaders intervene. The sooner these facts are dealt with, the easier the problems will be to mitigate and fix (with gradually phased-in changes, etc). The longer this can is kicked down the road, however, the more jarring inevitable corrections will be.  In the meantime, younger generations are being forced to surrender portions of every paycheck they earn to pay into systems that will not be there for them, despite ongoing and dishonest pledges from Uncle Sam.  These bogus, unfunded promises will have real consequences for real people, yet Washington is ignorant, short-sighted and paralyzed.  Worse, as I mentioned above, half of Washington wants to hugely expand these programs.  Democrats have been talking about expanding Social Security, and "Medicare for All" is now a mainstream, if not dominant, policy position among elected Democrats and their party's 2020 presidential field.

Under single-payer healthcare, Medicare 'as we know it' would actually be abolished, with all current recipients dumped into a new, government-run, no-choice system.  Proponents like Bernie Sanders and Kamala Harris admit that their plan would outlaw virtually all private coverage, banning the plans of roughly 180 million people, most of whom are satisfied with their existing arrangements.  The federal government cannot even figure out how to make good on already-made Medicare vows to future seniors.  Now they want to erect an entirely different system, with no opt-out, for every single American?  Doing so would cost at least $3.2 trillion in additional federal spending every year.  For reference, the government spent $4 trillion in 2017.  Total.  Leftists can try to  gloss over the requisite, bruising tax increases all they want, but they can't erase the stubborn math.  Finally, reassuring talk about "supplemental" insurance not being made completely illegal (how generous of them!) is also misleading:

Republicans: That's super irresponsible, but we don't really want to do anything.

Democrats: Let's take those two programs, massively expand them (and force every single American into a mammoth new version of one of them), figure out pesky fiscal details later, and then -- hear us out -- we'll be legends.