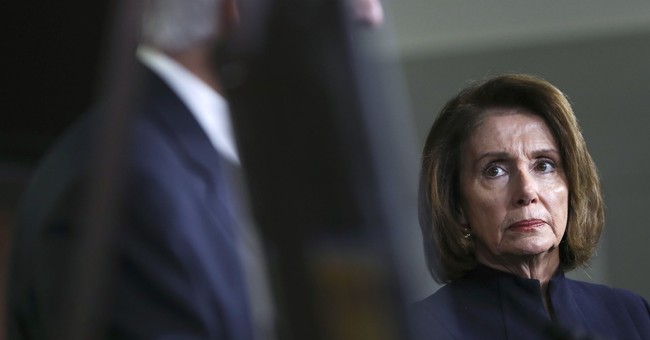 Go back and read this post from last week, in which I lambasted House Democrats -- supposedly eager to demonstrate their seriousness about governance -- for their craven calculation not to even attempt writing an annual budget.  They're required by law to do so, though there's no legal penalty for ignoring that mandate.  But at the very least, it's a core responsibility of political leadership: Explaining to the American people how politicians in power propose to spend their money.  Rather than spell out their detailed priorities on taxes and spending, Nancy Pelosi's new majority decided to punt:

House Democrats formally punted on releasing a budget blueprint on Tuesday, instead unveiling a bill that would increase military and domestic spending caps by more than $350 billion over the next two years. The proposal frustrated fiscal hawks on both sides of the aisle and Democrats on the party’s left flank who balked at the prospect of increasing military spending. It also meant that House Democrats, without a blueprint to counter the one the Trump administration released last month, had effectively opted out of outlining their own budget priorities in the face of a divided government and division within their caucus.

Instead, Democrats planned to offer alternative legislation that would heavily increase spending across the board -- blowing past previous caps -- without any committing to any specifics or details. Why? Their party is divided between center-left liberals and hardcore progressives. The former group is worried about getting pegged as tax-hikers; the latter thinks that anything short of a spending bonanza on unaffordable programs like single-payer healthcare and the Green New Deal is a sellout. So rather than fulfilling core governmental functions, Pelosi ran away, hiding behind vague legislation. But yesterday, Plan B blew up, too:

The backstory, via Politico:

House Democratic leaders on Tuesday abandoned plans to vote on a key budget measure this week in the face of sharp opposition from both progressives and moderates. The revolt over legislation to set federal spending is a setback for Speaker Nancy Pelosi and her deputies on the eve of their 100 day mark in the majority. And it darkens the outlook for how Washington will resolve a slew of ugly funding battles later this year. Democrats decided to punt a vote on the budget bill after both corners of their caucus — the Congressional Progressive Caucus and the moderate Blue Dog Coalition — warned they had enough muscle to tank the bill on the floor if they didn’t get their way. Leaders of the 90-member progressive caucus walked away from talks Tuesday elated, saying they'd proved their power within the House Democratic Caucus for the first time in the new majority...the failure to coalesce around a broader agreement — seen as a basic function of the majority — will punt bigger decisions on how Democrats want to handle the looming battle over budget caps...the Democrats’ stumble comes at an inopportune time for the caucus — one day before lawmakers head to their annual retreat to celebrate their first 100 days in power and strategize on their agenda going forward.

In their first 100 days, the House Democratic Majority has failed on budgeting, failed to adequately address anti-Semitism in their ranks, and failed to prevent rank-and-file members from joining Republicans on two separate motions to recommit, embarrassing leadership.  The Speaker has also dumped all over the "Green Dream," and blasted so-called "Medicare for all" as fiscally infeasible and worse than current policy.  They're off to quite a start.  Given this internal turmoil and dysfunction, why would Senate Republicans bail Democrats out?

House and Senate leaders have agreed to begin negotiating a two-year budget deal in the hope of avoiding another shutdown...Congressional leaders are charging ahead with negotiations on a deal to skirt $126 billion in spending cuts, even as an internal divide among House Democrats killed their bill staking an opening offer. But the Trump administration is reluctant. Senate Majority Leader Mitch McConnell said Tuesday afternoon that he and House Speaker Nancy Pelosi had agreed to begin negotiating a new two-year deal to raise budget caps, starting with discussions among congressional staff. The announcement dovetailed with news that House Democrats had called off a Wednesday vote on a bill that would raise budget limits for the fiscal year starting Oct. 1 and the fiscal year that follows.

I obviously understand and concede the need for budget negotiations, especially during divided government, and it's no secret that neither party wants to risk another government shutdown. That's all fine. But shouldn't the GOP apply pressure on Democrats to actually do their jobs and spell out, very specifically, their spending and taxation plans?  They wanted the majority, and now they've got it. Force them to do the difficult, and sometimes painful, work. Don't let them off the hook as they try to squirm away from tough votes. I'm aware of the various counterpoints, and some cynics may wonder if Mitch McConnell would prefer a bipartisan two-year agreement to a traditional budget process paying out in the Senate. But upper chamber Republicans have been introducing and passing budgets since regaining their majority in 2014, and just recently unveiled a five-year budgetary roadmap to controlling annual deficits.

One can have sharp disagreements with Republicans' spending and taxation plans, but at least they exist.  As Pelosi has repeatedly said while attacking GOP proposals, "show me your budget, show me your values."  Unable to lead her party effectively, she's now embracing a "no values" approach, based on her own talking point, a reminder of which I'll leave right here:

NOW: “House Democrats likely to punt on writing a budget amid divisions” pic.twitter.com/Y4EOTMhJ6L

Democratic leaders frequently expressed glee at Republican Speakers' struggles with disparate ideological camps within previous majorities, including the Freedom Caucus.  They're now getting a taste of what it's like.  The difference is that GOP leaders actually managed to consistently introduce and pass budget resolutions.