Oh My: Support for Impeachment, Faith in Mueller Crater in New Poll, as Majority Agrees Trump Is a 'Witch Hunt' Victim 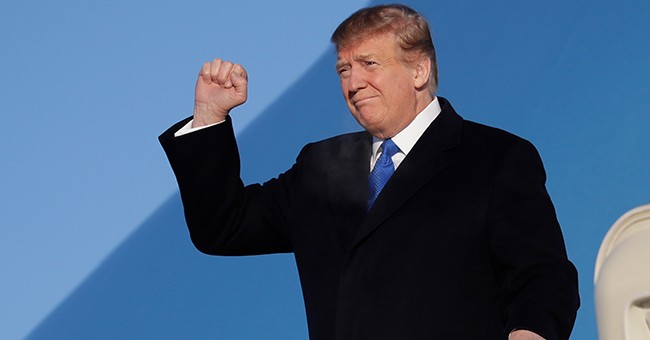 We'll get to the new polling in a moment, but first, some context: I realize that the commentariat has been speculating for many months about the Mueller probe finally "wrapping up," including repeated assertions from the president's team that the investigation was nearly over.  At last, it appears as though such conjecture is actually accurate.  A few weeks ago, various news sources reported that the report was being prepared, with other bread crumbs seeming to confirm that Mueller and team were in their home stretch.  A new detail that emerged last week about one of the Special Counsel's top deputies making arrangements to re-enter the 'normal' workforce:

Special counsel Robert Mueller's top deputy is leaving his post, adding to speculation that Mueller's office is winding down its work.  Deputy special counsel Andrew Weissmann, who oversaw Mueller's high-profile case against former Trump campaign chairman Paul Manafort, is expected to leave the office soon, Mueller spokesman Peter Carr confirmed.  "Andrew Weissmann will be concluding his detail to the Special Counsel's Office in the near future,” he said in an email, declining to comment further. Weissmann is expected to take a teaching post at New York University this fall...

We're still quite a distance from the fall, but if major aspects of the probe were still active, it's unlikely that a top official would be making plans to teach later this year.  On the other hand, it's also conceivable that because the Manafort angle has been exhausted, perhaps Mueller has given Weissmann permission to depart, now that the area of his focus is wrapped up.  Conceivable, but unlikely, in my view; Mueller would probably want to keep his core team together so long as any major avenues of exploration were still underway. Meanwhile, amid speculation that the public may not get to see the bulk of Mueller's findings, the House unanimously passed a resolution last week expressing the legislative body's will on that issue:

The House on Thursday unanimously passed a resolution calling on special counsel Robert Mueller to release his final report to the public once it's out. Lawmakers voted 420-0 in favor of the measure from House Judiciary Committee Chairman Jerrold Nadler, D-N.Y. Four Republicans voted "present" on the resolution...Democrats and Republicans have been pushing for the release of Mueller's report for different reasons. Democrats fear the report may show some wrongdoing by Trump that remains out of the public eye because of the Justice Department's policy of not indicting a sitting president...Republicans are out to make sure they understand exactly how Mueller operated in his investigation against Trump.

I'd add that the GOP would also like to see the book closed on this saga as soon as possible, especially if Mueller doesn't turn up hard evidence of collusion or provable obstruction. Democrats seem to be lowering their expectations and shifting their goalposts on the Special Counsel report, so one wonders if they're now convinced that will underwhelm. I'll admit to being a bit surprised that the House was able to vote for anything without a single dissenting vote, given the polarized nature of the Russia matter. The president tweeted over the weekend that he encouraged the GOP to vote along with Democrats as part of the optics "game:"

On the recent non-binding vote (420-0) in Congress about releasing the Mueller Report, I told leadership to let all Republicans vote for transparency. Makes us all look good and doesn’t matter. Play along with the game!

Now add to the mix a new USA Today/Suffolk poll showing that Trump's "witch hunt" messaging is resonating with a growing number voters, while the public's already-shrinking appetite for impeachment is waning:

Amid signs that special counsel Robert Mueller's investigation into Russian election interference may be near its conclusion, a new USA TODAY/Suffolk University Poll finds that trust in Mueller has eroded and half of Americans now agree with President Trump's contention that he has been the victim of a "witch hunt." Support for the House of Representatives to seriously consider impeaching the president has dropped since last October by 10 percentage points, to 28 percent...Fifty percent say they agree with Trump's assertion that the special counsel's investigation is a "witch hunt" and that he has been subjected to more investigations than previous presidents because of politics; 47 percent disagree. Just 3 percent don't have an opinion. There is, unsurprisingly, a stark partisan divide on that question: 86 percent of Republicans but just 14 percent of Democrats say Trump is the victim of a "witch hunt." Among independents, 54 percent say he is; 42 percent say he isn't. Still, the president's success in persuading fully half of the electorate that he’s been subjected to unprecedented scrutiny is notable, says David Paleologos, director of the Suffolk Political Research Center.

This survey may prove to be an outlier, and public opinion can shift rapidly based on factual developments, but the data is in keeping with the broader trend lines on Mueller (who has done nothing to erode my own trust, for what it's worth) and impeachment. I'll leave you with two thoughts: Concluding the Russia probe may be in everyone's best interests at this stage -- and perhaps Pelosi's firm rejection of impeachment wasn't just a shrewd move, but a nod to political necessity.