Hoo Boy: Are Democrats Planning to Move Forward With Impeachment, Regardless of What Mueller Finds? 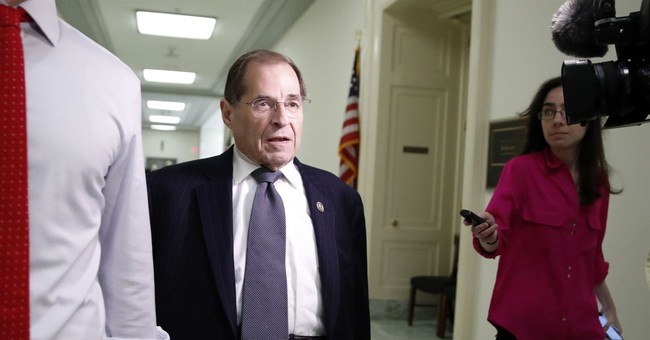 For months and months, we've been told the following -- and not without good reason: (1) The House Intelligence Committee's Russia investigation is hopelessly partisan and beset with intense infighting. (2) The Senate panel's parallel probe has been much more professionally handled, with sober bipartisan leadership, but its resources and powers are incomplete, so its 'no collusion' findings cannot be considered conclusive. (3) What really matters are the findings of Special Counsel Robert Mueller and his team.  Mueller is so important, in fact, that there has been constant hand-wringing about his investigation being canceled or disrupted by Trump.  But now that it's reportedly almost Mueller Time, there appears to be a concerted effort in anti-Trump circles to redefine the battlefield.  No matter what Mueller's verdict may be on Russian 'collusion,' we're increasingly told, Trump is already guilty:

The focus on whether Mueller can prove "collusion" is taking away attention from crimes can be readily proven: Trump has obstructed justice in plain sight and has been implicated in breaking campaign finance law. He also faces significant legal jeopardy for financial crimes.

That first tweet is a CNN analyst preparing his audience for a potential letdown, preemptively pivoting to focusing on already-known facts if Mueller doesn't drop new bombshells.  The second is the Senate Intelligence Committee's ranking member (who is slowly backing away from his call for his state's governor to resign) not exactly contradicting Chairman Burr, but basically arguing, "what we already know is bad enough."  Perhaps most importantly, the new leader of the House committee that would instigate the impeachment process against the president went on television over the weekend and declared that he's seen enough to conclude that its "very clear" the president has committed an impeachable crime:

BREAKING: @GStephanopoulos: "Do you think the president obstructed justice?"

Amid last week's Michael Cohen hearings, a number of liberals, journalists, and Republicans observed that the proceedings felt like the first step toward removing Trump from office.  Byron York argues that Democrats have now officially tipped their hand:

Think what you will about the reasons — calling an investigation a "witch hunt" is obstruction of justice? — but Nadler sounded less like a man weighing the evidence than a man who has has made up his mind. Given that, Nadler's ABC interview led to a question: President Nixon was threatened with impeachment for obstruction of justice. President Clinton was impeached for obstruction of justice. Why is Nadler, who heads the committee in the House that originates articles of impeachment, not moving forward with impeaching President Trump right now? ... Nadler's talk with ABC was the clearest indication yet that Democrats have decided to impeach Trump and are now simply doing the legwork involved in making that happen. And that means the debate among House Democrats will be a tactical one — what is the best time and way to go forward — rather than a more fundamental discussion of whether the president should be impeached...

Other House Democrats are sending similar messages. "There is abundant evidence of collusion," House Intelligence Committee Chairman Rep. Adam Schiff, D-Calif., said on CBS Sunday...So now the Democratic plan is coming into sharper relief. The impeachment decision has been made. Various committee chairs are moving forward in gathering and organizing the formal justification for removing the president. The timing decision is still up in the air, as is an overarching communications plan — selling impeachment to the American public, or more specifically those Americans who don't already support impeachment...whatever the stated rationale, impeachment is on.

The goalposts are moving before our very eyes.  But Allahpundit seems to agree that the Axios-floated grand strategy from House Democrats is not to pull the trigger on the I-word over the next year-plus, but rather to execute a slow-bleed of politically-damaging pain over that time span. The idea would be to cripple and overwhelm Trump's presidency all the way up to election day, then let the voters oust him from office. "The smart play is to do what they’re doing, launching an open-ended investigation that will dig up plenty of dirt on Trump and grind on to Election Day next year," he writes. "Instead of passing articles of impeachment and seeing them die in the Senate, they’re probably going to produce a Democratic counterpart to the Mueller report, laying out everything they find in gory detail and publishing it next summer so that the Democratic nominee and the media have a treasure trove of oppo to use against Trump." If I were a betting man, that would be my wager, too. I'll leave you with Trump-skeptical conservative writer David French attacking the Steele Dossier (the credibility of which was further eroded by Cohen's testimony):

It had multiple dreadful effects, including leading many, many Americans to believe their president was an actual Russian agent — without any verification or substantiation.

I agree with Trey Gowdy. The Russia investigation would exist with or without the dossier.

I also think the dossier has tainted the process and the debate. Hillary owns this. It was her operation.

Gowdy did, in fact, make this point, and Russia's 2016 electoral interference undoubtedly deserved very serious scrutiny. But a shady and unverified Clinton/DNC oppo research scheme serving as a primary driver of key elements of the investigation is a very bad look -- and it almost certainly fed a pernicious spiral of mutual mistrust between Trumpworld and the DOJ that has convinced people on each side that the other is dangerous and must be stopped.  The toxicity in American politics right now is palpable and worrisome.  By the way, not all Democrats agree that Nadler's sprawling, open-ended investigation is a smart move:

Maybe I’m missing something, but the hazard of an omnibus document demand by House judiciary versus discreet, serial ones is that, however legitimate the areas of inquiry, the wide-ranging nature of it is too easily plays into the “witch-hunt” meme.

UPDATE - Adam Schiff has apparently decided that Mueller's verdict on collusion won't be good enough. This is absurd: