Analysis: The FBI Investigated Whether Trump Was a Russian Asset. Legitimate Inquiry, or Witch Hunt? 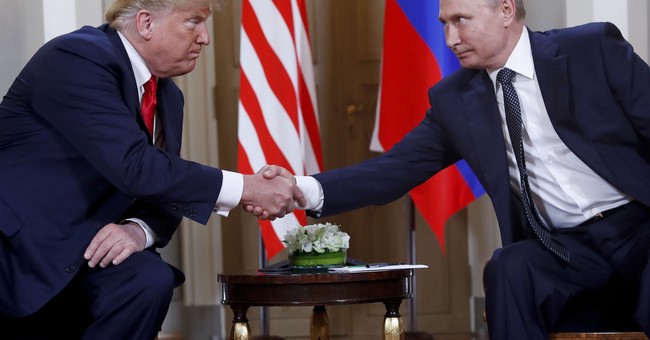 Even amid the partial federal shutdown, a pair of weekend stories from the New York Times and Washington Post reignited the Beltway's fascination with the Russia matter, raising new questions about President Trump's unusual posture toward Russia and its leader.  The Times reported that after Trump fired ex-FBI chief James Comey, the Bureau actively investigated whether Trump himself may have been some sort of Kremlin asset.  This is wild stuff:

In the days after President Trump fired James B. Comey as F.B.I. director, law enforcement officials became so concerned by the president’s behavior that they began investigating whether he had been working on behalf of Russia against American interests, according to former law enforcement officials and others familiar with the investigation. The inquiry carried explosive implications. Counterintelligence investigators had to consider whether the president’s own actions constituted a possible threat to national security. Agents also sought to determine whether Mr. Trump was knowingly working for Russia or had unwittingly fallen under Moscow’s influence. The investigation the F.B.I. opened into Mr. Trump also had a criminal aspect, which has long been publicly known: whether his firing of Mr. Comey constituted obstruction of justice.

Trump defenders will point out that (a) this story delivers no indication whatsoever that the FBI uncovered a shred of evidence to support this dramatic theory (side question: under whose authority did this occur)?, (b) firing Comey -- which President Hillary Clinton almost certainly would also have done -- was entirely within Trump's legitimate purview, and (c) Trump's replacement for Comey is widely respected and has been lauded for his independence and professionalism since taking over.  That is all true and important.  Relatedly, I strongly recommend Andy McCarthy's piece explaining why he believes the Bureau's Russia probe was always about Trump, from word one.  On the other hand, fair-minded people could very well be forgiven for finding Trump's shifting explanations over why he dismissed Comey, and this astonishing episode with Russian diplomats in the Oval Office shortly thereafter, to be extremely suspicious and disquieting.  If there's a "deep state" conspiracy to take down Trump (as I've written before, these alleged anti-Trump schemers could theoretically have pounced before the election, yet didn't), the president certainly hasn't always helped tamp down the rumors and conjecture.  Which brings us to the Post article I mentioned above:

Trump has gone to extraordinary lengths to hide details of talks with Putin, such as taking interpreter’s notes, U.S. officials say https://t.co/TxIarXrLFX

President Trump has gone to extraordinary lengths to conceal details of his conversations with Russian President Vladi­mir Putin, including on at least one occasion taking possession of the notes of his own interpreter and instructing the linguist not to discuss what had transpired with other administration officials, current and former U.S. officials said...The constraints that Trump imposed are part of a broader pattern by the president of shielding his communications with Putin from public scrutiny and preventing even high-ranking officials in his own administration from fully knowing what he has told one of the United States’ main adversaries. As a result, U.S. officials said there is no detailed record, even in classified files, of Trump’s face-to-face interactions with the Russian leader at five locations over the past two years. Such a gap would be unusual in any presidency...

Contrast this approach with the standard operating procedure under the previous administration (which was weaker on Russia policy-wise than Trump has been, it must be said, although the Syria withdrawal represents a serious boon to Moscow):

I participated in many meetings between Obama and Putin and Medvedev. We always had a small group of advisors and a notetaker (often me). After one-on-one pull asides, Obama would brief me and then I would give readouts to other senior officials. Translators also debriefed me. pic.twitter.com/wrj1E5XvSN

That's Obama's former Ambassador to Russia, a right-leaning, harsh Putin critic.  If there's a verifiably innocent or non-crazy reason Trump has bent over backwards, in highly unusual ways, to shield the contents of his private conversations with Russia's strongman, I'd love to hear it.  But at the very least, it doesn't help dispel the notion that there's some fire to the perceived smoke on Trump/Russia theories (incidentally, I don't think Democrats' consideration of doling out subpoenas to presidential translators is good precedent, or is even constitutionally acceptable under the separation of powers).  As observers and commentators attempt to unpack all of this (here's another view, positing that Trump's alleged obstruction of justice was the collusion), two analyses have resonated strongly with me.  First, liberal law professor Jonathan Turley writes that the actions of both Trump and Trump's opponents may have been perceived as mutually self-confirming to the other side, deepening the spiral of mistrust:

What if there were no collusion or conspiracy but simple cognitive bias on both sides, where the actions of one seemed to confirm precisely the suspicions of the other?...We have a clear picture of what the two sides saw at the start of the Trump administration. At the FBI, investigators, including then director James Comey, actively considered the unthinkable possibility that the president was controlled by Russia. At the White House, Trump believed that his associates and campaign had been placed under investigation by federal officials with close ties to Democratic figures. What happened next could be a lesson in cognitive bias, and it could indeed explain a lot...The result is two separate narratives that fed off the actions of each other. There likely was bias in the initial assumptions, with a willingness at the FBI to believe Trump would be a tool of the Russians, and a willingness by Trump to believe the FBI would be a tool of the Clintons. Every move and countermove confirmed each bias. Trump continued to denounce what he saw as a conspiracy. The FBI continued to investigate his obstructive attitude. One side saw a witch hunt where the other saw a mole hunt. Of course, neither side can accept at this point that they may have been wrong about the other side.

I have repeatedly said my approach to this entire issue is to wait and see what actual evidence emerges from the Mueller report (it's heartening to hear Trump's Attorney General nominee affirm that the special counsel being allowed to complete his work is "vitally important").  We should follow the facts, and our understanding of those facts remains woefully incomplete at this time.  That being said, Turley's read on what might be happening here is entirely plausible to me.  The whole thing is worth your time.  It's certainly worth bearing in mind, as each camp points fingers and ascribes dark motives to every detail that emerges.  Second, I cannot recommend Philip Klein's confession of Russiagate ambivalence highly enough.  This is precisely how I feel:

I’m perfectly open to the possibility that President Trump (or his campaign) colluded with Russians to influence the outcome of the 2016 election, but I just want to see evidence that proves it...Russia has dominated the news for the past two years, and people on each side have passionate and confidently held views. It seems either they’re convinced that Trump colluded and attempted to cover it up, or they’re convinced that it’s all a nothingburger cooked up to delegitimize the Trump presidency...I’ve been reluctant to get too far ahead of my skis in either proclaiming Trump’s innocence or declaring his guilt. What’s made me particularly wary is that there has been a steady stream of stories that have been promoted as being “bombshells,” that either end up being corrected, and/or turn out upon further analysis and with the benefit of context, to be less dispositive than initially advertised... The speculation has been repeatedly wrong -- even when it comes to something as basic as whether the investigation is nearing its conclusion...I support letting the Mueller investigation run its course. And when it does, I’ll be able to form an opinion. Until then, put me in the agnostic camp.

Amen.  So much of the coverage of this seemingly endless saga would be so much better, but possibly more boring, if this attitude were adopted by more reporters and commentators.  Finally, because the American people are clearly skeptical of overreach, this is the sort of thing that partially delegitimizes genuine questions about Trump's conduct, and further entrenches widespread perceptions that this is all just a partisan obsession.  Priorities:

So @RepEliotEngel plans to terminate the House Foreign Affairs Subcommittee on Terrorism and replace it with a Subcommittee to investigate Trump. @sbg1 reports. https://t.co/TFuQH2qgBl

Also, some people saw Trump's initial answer to a point-blank question about working on behalf of the Russians -- per the Times story -- as misdirection and a non-denial. I'll leave you with the straight-up denial:

Deeply Irresponsible: Biden Blasted for Weighing in Ahead of Chauvin Verdict
Townhall
'Start killing all the white folks': Ami Horowitz spoke with 'protesters' at the George Floyd memorial in Minneapolis and just WOW (watch)
Twitchy
Steven Crowder's Latest "Change My Mind" Shows How the Left Can't Accept That They're the Racists
Redstate
Insanity Wrap #190: Who Hates America More, Protestors in Iran or Minnesota?
PJ Media