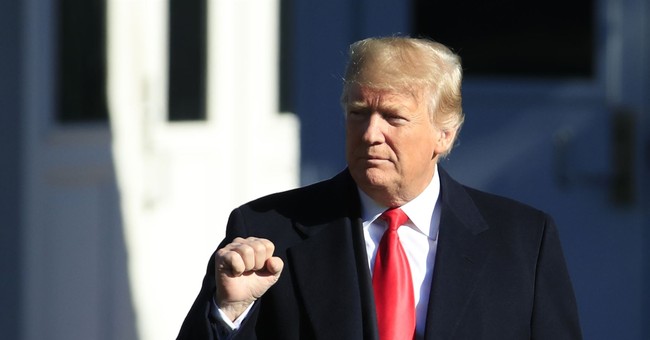 Let's begin with the good news for President Trump and the GOP in the latest NBC/Wall Street Journal national poll -- and there's a fair amount of it, too.  Before you get too bullish over any of these data points, however, bear in mind that the survey also underscores some of the Republican Party's ongoing challenges.  That said, some of these results don't seem to presage the sort of blue tsunami many liberals have been dreaming of for months. Have a look for yourself:

The image of the Democratic party took a noticeable hit in the last month, post-Kavanaugh.

On Trump's top line approval rating, it's now pretty clear that the Fox News poll we wrote about last week was not an outlier.  The president is now firmly in the mid-40's, which is exactly where many Republican strategists hoped he'd be before election day.  The GOP is dominating on the economy, and Democrats took a hit from the Kavanaugh circus.  This CNBC analysis of the new data also demonstrates why the opposition party's fortunes have eroded:

Recent shifts may have narrowed the range of potential Democratic House gains. The poll shows Republicans have restored a 14 percentage point edge in districts they already control, up from just two points in August. That also signals brighter GOP prospects in key Senate contests, which take place mostly in Trump-friendly states. In House districts they currently hold, Democrats lead by 29 points, up from 25 in August...As the president's job approval rose to an all-time high of 47 percent, Republicans narrowed their double-digit September deficit for control of Congress to seven percentage points among all registered voters.

The Washington Post also concluded over the weekend that Democrats' map of potential pick-ups may have contracted a bit:

Democratic hopes for a wave election that would carry them to a significant House majority have been tempered in recent weeks amid a shifting political landscape and a torrent of hard-hitting attack ads from Republicans. Democrats remain favored to win, but GOP leaders believe they can minimize the number of seats they would lose — and, perhaps, find a path to preserving their advantage in the chamber. The tightening, with just over two weeks left, reflects how President Trump’s rising approval rating and the polarizing fight over Supreme Court Justice Brett M. Kavanaugh appear to be boosting the party’s candidates in a number of conservative and rural districts that have been considered up for grabs...“The past few weeks haven’t really diminished Democrats’ chances of a takeover by that much, but they’ve increased the chances of a small Democratic majority,” said David Wasserman, House editor for the nonpartisan Cook Political Report. He estimated Democrats have a 70 to 75 percent chance of winning the House.

The president's improved standing is welcome news for many GOP candidates up and down the ballot.  But even though it's true that he may now be slightly more popular than President Obama was prior to the 2010 elections (on average, he's in the same ballpark), that may be cold comfort to Republicans, considering that Obama's party lost a whopping 63 House seats that year.  Also concerning for Trump's party is the fact that despite his uptick, they still trail Democrats by nine percentage points among likely voters, among whom the president's job approval is a few points lower, at 45 percent.  This indicates that Democrats have regained an enthusiasm edge, wherein the likely voters are more inclined to support the 'out' party than the wider population of registered voters.  This is a rare phenomenon.  Fueling the Dems' advantage is a wide gender gap, as well as a double-digit lead with independents.  If those trends hold, Republicans will need to rely on very strong base turnout to remain competitive in some key races.  Speaking of key races, we've been paying special attention to the Arizona Senate race, in which Republican Martha McSally has bumped out to a narrow lead -- with potentially more room to grow:

Matt has an upcoming piece about the GOP's sunniest projection, which anticipates that the party could expand its Senate majority in November to 55 seats (with another fairly challenging map for Democrats in 2020), but I'd place that estimate on the outer edge of optimism.  One of my best sources with deep, inside knowledge of the key races says a GOP net gain of roughly two seats -- to land on 53, give or take -- is much more attainable.  The only scenario under which Democrats can win back the upper chamber entails a number of upsets, driven by new voters and under-anticipated Democratic turnout.  But if the polls are even approximately correct, Republicans look like they're on track to maintain their narrow majority, at worst.