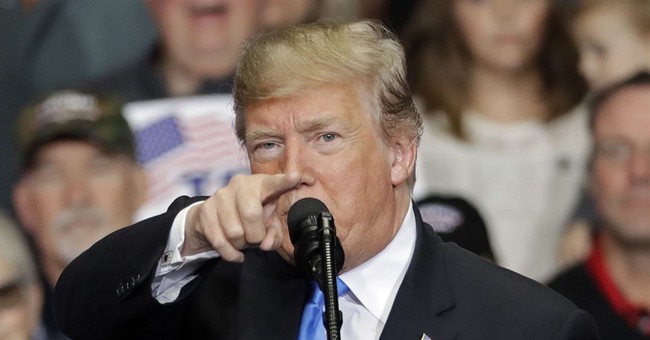 We'll get to POTUS' calendar below, but first, some context: One of the key ingredients behind the GOP's buoyed electoral fortunes in recent weeks has been the president's approval rating, which stabilized in the mid-40's.  If he's starting to slide -- potentially because of his uneven or erratic responses to the turbulence and bloodshed of recent days -- that could hurt Republicans broadly next Tuesday.  His strong supporters and opponents won't budge, of course, but independents who've viewed the Trump presidency more favorably lately may be put off by the president lashing out at the press (the Stalinist "enemy of the people" formulation is back), launching new criticisms of some of the mail bomb targets, and holding partisan rallies in the immediate aftermath of both the bomb scare and synagogue shooting.

Then layer in Trump taking a reporter's bait on birthright citizenship, which could goose GOP turnout in some places but harm the party in crucial suburban districts.  There's a legitimate discussion to be had on the question of birthright citizenship; America has an (somewhat un-codified) policy that's an outlier among industrialized nations.  But we're not going to have a reasoned debate over that question in the final week of a heated campaign.  Raising a fraught and complex issue just before a high-stakes election is risky unto itself, setting aside the ridiculous notion that the status quo could be upended by executive order.  Trump's unexpected gambit will reinforce predetermined views of Trump among totally decided voters in both directions, but it could underscore a perception of chaotic, 'seat-of-his-pants' governance that is disconcerting to swing voters like suburban women.  In a slew of key races, unaffiliated voters hold the key to victory.  So is this a worrisome sign?

The last week has been driven by Trump's response to the mail bombs and Pittsburgh, and now he's leaning into birthright citizenship. His Gallup approval has dropped 4 points and there are new discouraging polls for the GOP this AM. We'll see if this proves a bigger trend, but...

Kornacki's follow-up tweet contrasts the last week with Trump's relative stability during the 2016 home stretch.  Two sharp observers conclude that 'Trump being Trump,' in this context, could be problematic for Republicans hoping to eke out close wins in the sorts of House districts that will make the difference between a blue ripple and a larger blue wave:

Trump is raising the odds of Dems maximizing their gains in the House // many of the reach districts are still fairly suburban and not fans of his hardline immigration message https://t.co/8JEuB1jrxg

The current RealClearPolitics tracker lists 204 House seats in the 'safe/likely/leans' Democrat category, and 199 in the 'safe/likely/leans' Republican column.  Thirty-two are pure toss-ups, nearly all of which are currently GOP-held seats.  Based on this map, Democrats only need to win about one-third of the toss-ups to take the House.  I continue to believe that the more pertinent question is not whether they'll recapture the lower chamber, but rather how big their cushion will be.  A reasonable 'over/under' is roughly 35 seats, and there are very plausible scenarios under which I'd take the 'over' -- just look at the money disparity and the direction of Republican money, which is shifting to lock down seemingly safe-ish seats.  For what it's worth, FiveThirtyEight gives the GOP a 14 percent chance of retaining its House majority.  Over on the Senate side, as usual, things are looking better for Republicans:

Three of the top four likeliest seat flips would favor Republicans, and Nevada remains very much winnable for Heller in Nevada.  Democrats have gotten some decent polling news in Arizona, where Kyrsten Sinema has led by three points in a pair of new surveys (if she wins, it'll be because of independents, as early voting tabulations look pretty decent for Republicans), and Florida's Bill Nelson is on the sunnier side of a few polls showing a one-to-two point race (though others have shown an exact tie, or Rick Scott barely leading).  As usual, that state will be incredibly close.  Intriguingly, Chuck Schumer's SuperPAC -- which has been spending millions to salvage New Jersey -- just dropped $150,000 into Montana to help Jon Tester, and $700,000 in West Virginia. That is an absolutely enormous expenditure for that state.  Are Democrats' internals showing something more troubling for Joe Manchin than public polling would suggest?  Post-Kavanaugh, Manchin is up double digits.  He certainly looks safe, but in addition to Schumer's curious eleventh-hour money bomb, President Trump will be visiting the state between now and election day:

Notice that Trump will not set foot in North Dakota, where he's certainly an asset for Kevin Cramer.  This suggests that just about everyone sees that contest as a fait accompli. Instead, POTUS will visit Florida, Indiana, and Missouri twice apiece, in addition to single stops in West Virginia, Montana, Georgia, Ohio, and Tennessee.  I'll leave you with yet another poll showing Joe Donnelly losing in the Hoosier State:

It looks like the president's team has decided that over the final stretch, Trump will be primarily deployed to states with important Senate races, with a special emphasis on boosting Rick Scott (plus Ron DeSantis), Mike Braun and Josh Hawley.  If the GOP can capture two Democrat-held seats, there's virtually no chance they won't hold a majority next session.  As we've relayed elsewhere, barring a much bigger than anticipated blue wave (not impossible!), Republicans have a real shot at swelling their current majority by one-to-three seats.